When Kristen Thompson ’09 sees the inequalities that exist in the education system where she lives and works in Cape Town, South Africa, she is reminded of how fortunate she was in her own education at the College of Charleston.

“I’ve been interested in education for a very long time because I recognize the value of education in my own life,” Thompson says.

Thompson grew up in Murrells Inlet, South Carolina, where her parents worked tirelessly to provide a college education for her and her siblings. Unable to attend college themselves, Thompson’s parents emphasized the importance of education. Taking their encouragement to heart, she enrolled in the CofC Honors College, double majoring in political science and communication. She excelled, going on to graduate as a recipient of the College’s most prestigious honor for undergraduate students, the Bishop Robert Smith Award. The award is given only to students who have exhibited impressive leadership and academic merit. 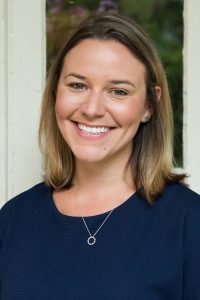 While attending the College, Thompson participated in several extra-curricular activities, such as the South Carolina Student Legislature and Americans for Informed Democracy. Her experience defending a budget before the Student Government Association prepared her for presenting funding proposals to potential sponsors of  her employer, Numeric, a South African non-profit that provides after school mathematics lessons to students and trains new math teachers. Thompson is the organization’s general manager.

According to Thompson, the public education system of South Africa still bears the scars left over from apartheid. A lack of quality education widens disparities along social, racial, and economic lines. Thompson is particularly sensitive to these issues due to the keen political awareness she developed while studying at the College.

She credits her professors at the College with fostering her awareness. John Creed, an associate professor in the Department of Political Science, had the biggest influence on her. Thompson did an independent study with Creed to write her bachelor’s essay. She kept in touch after graduation, and even invited him and several of her other professors to her wedding.

“He poured so much into his students,” Thompson recalls. “He provided critique and feedback in a way that was supportive and allowed me the freedom to grow as a student.”

After college, Thompson received a scholarship through the sponsorship of the Rotary Club of Mount Pleasant, South Carolina. The Rotary Ambassadorial Scholarship sent her overseas to the University of Cape Town where she received a master’s degree in international relations with a focus on education and development. While at the university, Thompson served as an academic development consultant and tutor for incoming students. She noticed that most of the new students had very poor writing skills. Thompson helped create a reading and writing tutorial program to aid students and, in the process, discovered her calling: To get involved in improving education opportunities for young South Africans.

“I think my interest in intervention programs in South Africa specifically came from that experience,” Thompson says.

With Numeric, Thompson tackles the much wider issue of math education in South Africa. She explains that due to large class sizes and lack of time to review material, students move from grade to grade with large gaps in their mathematical knowledge. Numeric aims to fill those gaps with foundational math concepts as well as encouragement to enter math-related fields. Thompson describes how students who would have settled for low-paying jobs are now choosing careers in engineering and medicine, improving their futures and their community.

Despite her background in political science, Thompson chose a career not in law or politics but in education. While not a logical leap at first glance, her work at Numeric and experiences in South Africa reveals how the two fields are intertwined.

“Politics is about understanding power dynamics in society,” says Thompson. “I’ve always been interested in development work and ways that individuals can shift the power in society, and for me there’s no greater tool for doing that than education.”