While the nation paused this week to reflect on the tragedy of 9/11, the passage of time hasn’t made it any easier to adequately articulate the horror of that day’s events, which many consider to be indescribable. 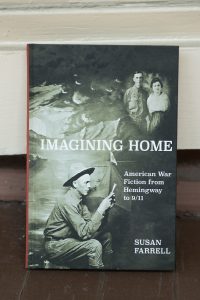 Even seasoned writers have long grappled with the difficult task of putting devastating events into words, says Susan Farrell, an English professor at the College of Charleston whose latest book, Imagining Home: American War Fiction from Hemingway to 9/11, provides a thoughtful critique of popular war fiction, including works by Ernest Hemingway, Kurt Vonnegut and Tim O’Brien.

“The trauma of 9/11, then, is often referred to as  ‘unrepresentable’ or ‘unspeakable,’” says Farrell. “But what I noticed in teaching this body of literature is that it really has a great deal in common with previous American war literature. For at least the past 100 years, since Ernest Hemingway wrote his novels and stories about the First World War, American writers have been concerned with the inadequacy of ordinary language to describe war and wartime trauma.”

Farrell uses her book as a platform to forge an important connection between 20th and 21st century American war fiction by looking through two different lenses. Her genuine interest in 9/11-based literature was the impetus behind this re-evaluation of war fiction that she deems as not only beyond description, but also gendered. Stiff male and female stereotypes are highly detectable in both eras of literary fiction, she says.

While many works of well-known war fiction pursue gendered ideas of masculine frontlines and feminine domesticity, Farrell investigated a collection of works that dispute these wartime roles. “The American war writers I examine in the book all challenge such traditional gender stereotypes. They show male characters who struggle with conventional expectations of masculine courage and camaraderie, and who, above all, long for home in the midst of war. But traditional ideas about home and domesticity turn out to be illusions as well — homes are not safe havens in the world of war, completely separate from the frontlines, and women are neither innocents to be protected nor nurturers whose job is to replenish men spiritually.”

Another aim of her book, Farrell says, is to expose the false perception that the homefront is contained inside its own protective sphere by highlighting work that blurs the line between guarded domestic life and the violence of global politics.

Farrell’s research and published work on American war fiction are closely intertwined with her teaching, which includes courses on 20th and 21st century war fiction as well as past courses on the Vietnam War and 9/11 war fiction. She finds that her students embrace the subject of war fiction and recognize that the world of literary fiction allows authors to tell war stories through an emotional perspective that facts cannot create.

“It can be a difficult and painful genre to read, no doubt, but it can also be eye-opening and truly create empathy for the suffering of people in tragic circumstances.”