A seashell made of soda can tabs. A brightly colored fish with aluminum scales dotted with familiar logos of beer and soda. And a spindly crab with legs that were once the sturdy bones of a beach chair.

These student-made creations born from trash collected on Sullivan’s Island, S.C., will make their debut in a display in the lobby of the School of Sciences and Mathematics Building on Wednesday, Oct. 25, 2017, as part of the “Sea Change” exhibition co-sponsored by the College of Charleston’s Halsey Institute of Contemporary Art and the South Carolina Aquarium. Students in Jarod Charzewski’s class pick up trash at the beach to use in their sculptures. (Photo by Reese Moore)

The process of turning trash into visual treasure has been challenging but fun, says sophomore Beth Alexander.

“We definitely all spent some time just sitting here, staring at everything we had picked up, trying to figure out what to do with it,” says the studio art major.

Alexander and her classmates got to participate in the exhibition through their Sculpture I class, an introductory course aimed at getting students interested in multi-dimensional art. With an emphasis on the environmental impacts of trash – specifically, the planet’s waterways, oceans and seas – “Sea Change” and related programs aim to raise awareness about pollution through art made from plastic waste. To drive that point home, sculpture professor Jarod Charzewski tasked his students with collecting trash from the beaches, dunes and roadways of Sullivan’s Island, a barrier island along the coast of Charleston, and using those materials to create art. Students work on their sculptures in the studio. (Photo by Reese Moore)

Charzewski says artists can take two approaches when using reclaimed materials. One is organic in nature and allows the work to come to fruition by feel. And the second is a literal tact where materials build a specific shape, such as a jelly fish or dolphin.

“I like seeing how the students want to interpret it and where their tendency is to take it,” says Charzewski. “What I’m looking for is that things are well crafted and that they have challenged themselves. I want to see their experimentation and creativity, not just in the idea, but in how they handle the materials. Is it just a bottle cap or is it an eye ball? If you cut up a bottle cap in certain ways it can do different things.”

Sophomore Caroline Campione says the project has pushed her and her classmates to be more flexible in the materials they use.

“I don’t think any of us came in thinking, ‘Ok, I’m going to make a fish out of cans,’” says the public health major and studio art minor. “I saw I had a lot of cans with cool colors and that’s just sort of what came out of it.”

Aurora Robson, one of the two artists featured in “Sea Change,” recently provided the students with feedback on their work ahead of the exhibition’s opening. Robson, whose work engages viewers in recognizing the growing problems of pollution, particularly plastic waste, offered tips about the composition of their pieces as well as ideas for how to construct them using environmentally friendly materials.

Looking at Alexander’s creation, a sea crown for a Poseidon, god of the sea, adorned with discarded bottle caps, strips of soda cans and a soda can tab seashell, Robson complimented the piece for its juxtaposition of whimsy with the the growing problem of aquatic pollution.

“If we were to entertain that such a god were to exist right now this is what their environment is becoming,” she says.

Charzewski says the point of the students’ work, like that of “Sea Change,” is to make you think.

“What I think artists are good at is not coming up with answers, but more questions,” says Charzewski. “This is by no means going to solve any problems – making stuff from trash – but it gets the conversation going, and that’s what it’s about.” 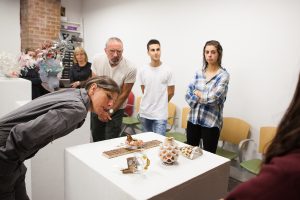 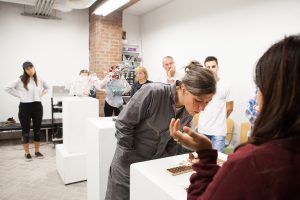 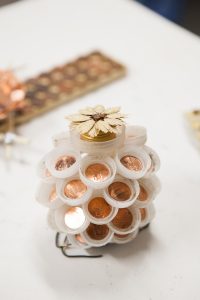 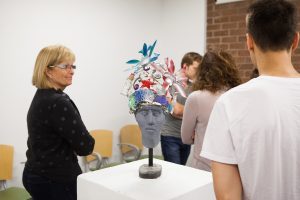 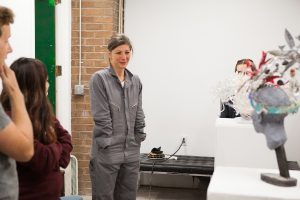 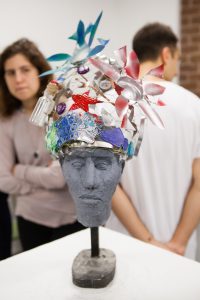 In the above photos, artist Aurora Robson critiques the students’ work.

All photos by Reese Moore.