During the semester long Cuba en el Horizonte program, the College is offering many Cuba-related classes aimed at highlighting the rich history and culture of the Caribbean island nation.

History professor Lisa Covert is teaching a class on the life and times of Cuba revolutionist Che Guevara. The political leader was interesting to Covert as a topic of study because she believes that Guevara’s influence spans the globe.

“He spent time in almost every corner of Latin America, he joined a revolutionary effort in Africa, and he was a diplomat who met with world leaders,” says Covert. “This makes his life a terrific lens for exploring the hopes, fears, and turbulence of the 1950s and 1960s.” 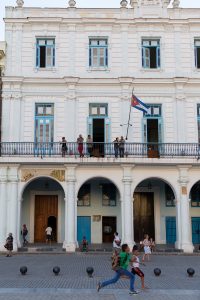 By looking through a biographical and historical perspective, Covert says this class will also provide a greater context for understanding Guevara and that period of time. And since this is a First Year Experience seminar, Covert says she wants use this class to provide students with the critical thinking skills that they can apply throughout their years at the College.

“My goal is to challenge students to look beyond the caricature to see the nuance and complexity in his life, as well as the broader historical currents that surrounded him,” she says.

Of course you can’t study the rich culture of Cuba with out talking about music. That’s why music professor Michael O’Brien is teaching three classes associated with the College’s Cuba project. One class focuses on developing a Latin American music ensemble, one looks at the music of Latin America and the third class explores the performing arts of Cuba.

RELATED: Learn more about the Cuba project and how it got started.

O’Brien says he encourages students in his classes to dig deeper and discover the many layers of the Cuba experience.

“I’ve been seeing some of the fruits of these connections already: a student asked me today about connections between the artwork of Roberto Diago and the music of Luis Barbería,” says O’Brien. “It’s exciting, because I think it’s how liberal arts learning works when it’s at its best.“

Other courses offered in conjunction with the Cuba project, which launched in January 2018, include a study of Cuba tourism, the history of the Cuban Revolution and the laws surrounding the Guantanamo Bay prison.

The Cuba project will culminate with a grand finale on April 7, 2018, featuring Cuban music, singing and dancing in Sottile Theatre.