A flickering screen and glimpses of movement might have caught your eye once or twice as you’ve walked past the Halsey Institute of Contemporary Art.

But chances are you probably aren’t aware that the source of those images is an unconventional movie theater called a “microcinema” playing 24/7 in a little alcove between the Halsey and and the College Lodge on Calhoun Street.

Mark Sloan, the Halsey’s longtime director and chief curator, started the standing-room-only, rear-projection theater in 2012, which has had six official films play so far, all tied to exhibits. The short film, Habana Solo by Juan Carlo Alom, which runs through March 4, 2018, is about how life on the island is improvised and is tied to Cuban artist Roberto Diago’s Halsey exhibit “La Historia Recordada.” 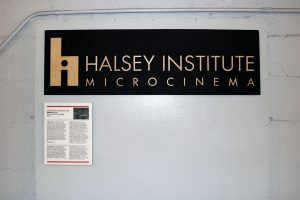 “It’s a country without a lot of things, so they live with deprivation and lack of resources,” says Sloan, “so it’s about the people making the very best of the economic situation they’re in.”

The film couldn’t be a better metaphor for why the microcinema is there in the first place. When the Halsey was being designed back in the early 2000s, it included plans for the College Lodge to be torn down to make way for a loading dock for the gallery. But a “Save the College Lodge” campaign put the kibosh on that.

“So we improvised,” Sloan says with a shrug, “much in the spirit of Habana Solo.”

“The idea was to create something that was secret and people would discover and feel like they have their own little magic place in town,” he says. “It’s like a revelation. Who does this? Why is this here? I like to create something where there are more questions than answers.”

The microcinema also plays into the motif that Charleston is a pedestrian-friendly city filled with nooks and crannies. “You look over fences into these beautiful courtyards,” Sloan adds. “The city reveals itself and rewards close looking and curiosity. I wanted to reward that and create a little something people could discover.”

He’s had to replace the screen twice due to vandalism, but he plans on increasing the number of films shown because his staff, not to mention inquisitive residents and tourists, are really keen on it.

Sloan likens it to the Cajun term lagniappe (pronounced lan-yap), which means a little something extra that you didn’t expect, like a baker’s dozen. “This is lagniappe to the Halsey,” he says. “I can’t tell you what we’re going to be showing in terms of what the content will be, but I can tell you there will be much more activity in the future.”