Who’s Who of Historians Taking Part in Reconstruction Conference

The Civil War might have ended in 1865, but the fighting didn’t end there. The 12-year period of Reconstruction and the decades that followed were fraught with all kinds of conflict. There was, however, a brief but shining moment during what is known as “Radical Reconstruction” from 1867-1870 when progressive state conventions like South Carolina’s in 1868 ushered in a host of legal reforms, provided for public education, and saw former slaves winning election to a variety of government positions, including Congress.

In honor of the 150th anniversary of South Carolina’s multi-racial Constitutional Convention, which took place in Charleston, the College will host a conference titled “Freedoms Gained and Lost: Reinterpreting Reconstruction in the Atlantic World” from Friday-Sunday, March 16-March 18, 2018, at Addlestone Library. The event will open with the dedication of a new historic marker at 2:30 p.m. on Friday at the corner of Meeting and Broad streets where the 1868 convention took place. 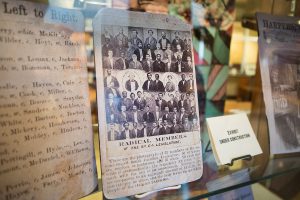 Items from the Reconstruction exhibit in the College’s Special Collections.

“The conference is taking place on the anniversary of the convention, which is pretty exciting,” says history professor Adam Domby, who organized the conference. “Some of the biggest names in the field of Reconstruction history will be speaking.”

In partnership with various cultural heritage organizations, academic institutions, historic sites and the Carolina Lowcountry and the Atlantic World Program (CLAW), the symposium will feature panels and presentations germane to the larger topic of gaining and losing freedoms (South Carolina’s 1895 Constitution deliberately overturned the provisions of the 1868 convention). More than 50 historians will take part and give talks on topics such as women’s rights, reinterpreting the Reconstruction Acts, access to education, civil rights activism, the meaning of emancipation, and the lasting social and cultural legacies from Reconstruction.

At the top of the Who’s Who list is Eric Foner, one of the country’s most prominent historians who literally wrote the book on Reconstruction. The Columbia University professor and 2011 Pulitzer Prize winner will be part of a round-table discussion titled “The Making of a Reconstruction Era Monument” on Saturday, March 17, 2018, from 3-5 p.m. Bruce Baker, of Newcastle University in the United Kingdom and author of What Reconstruction Meant and co-editor of Remembering Reconstruction: Struggles over the Meaning of America’s Most Turbulent Era, will give the keynote Wells Fargo distinguished public lecture on Friday evening at 6 p.m. 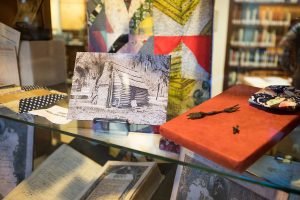 In addition, the College of Charleston’s libraries will host an original exhibit curated by historians and archivists showcasing the documentary heritage of Reconstruction and the post-emancipation era in South Carolina and the Atlantic world. The free exhibit will open Friday in the College’s Special Collections, located on the third floor of Addlestone Library.

More than 40 artifacts will be on display through the end of the year, including the 1868 state constitution, the names of 66 formerly enslaved persons emancipated on June 21, 1865, and labor “agreements” that basically perpetuated the system of slavery.

The conference will conclude with a bus trip to Beaufort, South Carolina, to tour the newly declared Reconstruction Era National Monument (one of President Barack Obama’s last acts as president) and a walk past the house of Robert Smalls, a former slave turned Congressman who was an instrumental figure at the 1868 convention, authoring the state legislation that provided for the first public school system in South Carolina.

“It’s great that the College is hosting this conference,” adds Domby, who will speak Saturday morning on Reconstruction violence. “The Civil War often overshadows Reconstruction, but in many ways Reconstruction is as important because Americans had to rebuild the country and determine what this new nation would look like. We are still dealing with the outcome of those decisions today.”