You may have noticed that Latin phrase on the archway over the metal gate as you exit Cougar Mall to the sidewalk along Calhoun Street. Since it was installed in May of 1968, millions of students and visitors have walked beneath the gate’s ornate spires onto the College of Charleston campus. But it’s safe to say that in the 50 years since the Class of 1968 donated the gate, only a small fraction of those passersby could translate the phrase forged within the iron. 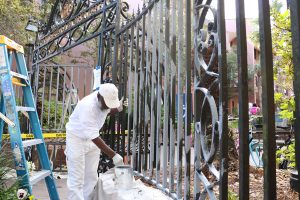 The 50-year-old gate recently got a new coat of paint.

That’s where classics professor Tim Johnson helps out. His translation of the phrase haec olim meminisse iuvabit is this:

“someday, it will please you to remember even these present troubles”

“The quote is from Vergil’s Aeneid, book 1.203, when Aeneas addresses his companion-exiles, washed ashore on the beach at Carthage, after they suffered the fall of their home-city Troy, many monstrous experiences, and now shipwreck,” says Johnson. “The speech he gives is an invocation for his people to set aside their current misery in favor of feasting, heavy drinking, and some sleep. It is easy, given the rigors of academia, for students, faculty, staff, and administrators to empathize with Aeneas’ worn-out prayer.”

RELATED: Learn why the College’s Department of Classics ranks among the best nationally.

But Johnson says that may not be the end of the story. 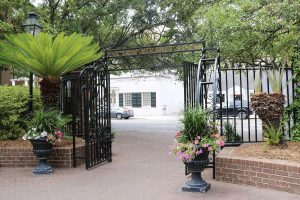 The Latin gate looking out onto Calhoun Street.

“The most famous modern rendition of Aeneas’ hope-filled reassurance to his fellow-refugees is from the 1939 movie Goodbye Mr. Chips, recognized as one of the top 100 films in British cinema and remade as a musical only one year after the Latin Gate was dedicated,” he says. “In the film, Charles Chipping (Mr. Chips), now in his eighties, dreams about his past career as a classics teacher at Brookfield, a fictional minor public boarding school. His vision recalls among other memories the day of his retirement, when he declared to his students: haec olim meminisse iuvabit. With the exhausted Aeneas in the background, Mr. Chips with a chuckle forever turns the phrase into a celebration of the academy: both teachers’ arduous but often unrewarded care for their students and their students’ studious labors over books and papers in hopes of securing the good life.”

On this the 50th anniversary of the installation of the gate, Johnson invites us to remember Aeneas’ claims that mindfulness of the past, even its troubles, gives value to the present.

“In many ways, the Latin gate is the summation of the College of Charleston and her insistence on the necessity of the liberal arts,” says Johnson. “It is a strong gate, standing open, and it is a privilege to walk through it.”