By Amanda Kerr|2020-02-25T12:58:04-05:00July 10, 2018|Alumni, College of Charleston Magazine|Comments Off on Alumna Runs a Tight Ship
Dona Toteva Lacayo ’05 had never been to the United States. In fact, she had never even left her native country of Bulgaria prior to boarding a plane to begin her freshman year at the College. Little did she know that her maiden voyage across the Atlantic would be a precursor to a career transporting everything from bananas to cars around the globe. As the chief commercial and public affairs officer at the Port of Hueneme (wy-NEEM-ee) in California, Lacayo understands better than most the value of international travel. “There is a lot of room in our industry to continually change and bring innovation,” says Lacayo. “As a young adult who is looking for excitement and making an impact, this is certainly an industry supllywhere you will find that.” But as an international student acclimating to the vast cultural differences between the Eastern European country of Bulgaria and the Southern roots of the Holy City in 2000, Lacayo wasn’t thinking about a career in the shipping industry. 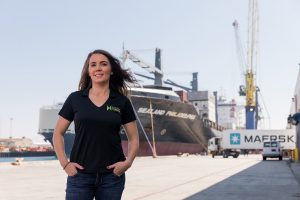 Dona Lacayo at the Port of Hueneme (photo by Mike Ledford)

“I started the College with a declared major of political science,” she says, noting that she heard about the College from a friend who had attended. “A year into school, I found a job through the Career Center at OOCL, which is an international ocean carrier. It got me to really be involved in transportation and international trade at the time, and I thought it was pretty interesting.” With her curiosity piqued, the industrious young woman switched gears – and majors – to international business with a concentration in global logistics and transportation. Under the guidance of Professor and Global Logistics and Transportation Program Director Kent Gourdin, whom Lacayo says is “still my mentor,” she embraced the challenge of learning the intricacies of moving goods around the world. She started her career in 2005 working in business development for Horizon Lines in Long Beach, Calif., before taking a position in sales with cargo shipping company Hapag Lloyd. Then, in 2014, Lacayo joined the team at the Port of Hueneme, where she handles everything from government and community relations to business development, including commercial strategies aimed at growing the port. Around 400 ships pass through the port each year, carrying $9 billion in goods with a direct economic impact to Ventura County of $1.5 billion. Some of the businesses that import and export goods through the Port of Hueneme include BMW, GLOVIS, Del Monte, WWL, Yara, Chiquita and Maersk/Sealand. “Moving goods around the world is close to my heart,” says Lacayo. “I can relate having come from Bulgaria to the United States. With international relations, even though we’re far apart, we’re interconnected. A lot of times we end up having breakfast in the morning, and the banana we’re eating came from Ecuador.” And that’s why this adventurous spirit made a leap of faith to travel around the world and from coast to coast. It’s all connected: people, food, clothes, cars, life. “If you’re selling a product, you’re going to have to understand supply chain management and what that means for your business,” says Lacayo. “There’s a lot of room for innovation, for improvement and for making an impact.” That’s worth the trip.