Inside the Academic Mind: Irina Erman

In fall 2015, Irina Erman, program director of Russian studies, came to the College because of its commitment to small class sizes and its unique teacher-scholar model, which emphasizes teaching and mentoring. We caught up with Professor Erman to learn more about her experience as a first-generation American, her love of Russian literature and interest in vampires.

Why did your parents immigrate to America? I was born in Russia and moved to the U.S. with my parents when I was 11. My family moved to America for the same reason that many others do: for better economic opportunity and the promise of the American dream – the promise that if you work hard, you and your children can have a better life.

What about your childhood home in the U.S. stands out? I grew up in Jacksonville, Fla. When we first came to the U.S., we flew from Moscow to Jacksonville and we landed at night, so my first impression of Jacksonville as a kid was walking out of the airport and feeling the warm, humid spring air. I had never been to the beach and never experienced anything like it. I kept on looking for the glass ceiling because I thought maybe we had walked out of the airport into a greenhouse. The warm, humid nights are still my favorite thing about living in the South. 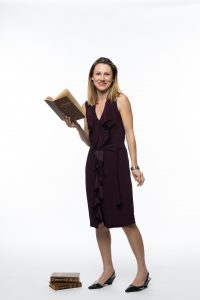 What has it been like straddling multiple cultures? Being an immigrant child can be a little bit stressful at times. I think many other first-generation kids can probably relate to my experience. For instance, I often had to translate for my mother at the store or at the doctor’s office because I was learning English in school, and she didn’t have the same opportunity to immerse herself in the language. But everyone I met was always so welcoming and curious to find out about our culture that I quickly grew to enjoy my “double life.” I love it even more now because it gives me the ability to see the world from different viewpoints and appreciate different perspectives.

How did you come to specialize in 19th- and 20th-century Russian literature? I’ve been an avid reader since childhood. In Russia, I read books by British and American authors because they told me about a faraway world, which I never thought I would experience. In college here in the U.S., I started to seriously study literature, including ancient Greek and Russian. So, I actually fell in love with Russian literature as an American college student.

Vasily Rozanov, whom you did your dissertation work on, is a fairly controversial Russian writer for his paradoxical views on religion, government and sex. How did you come to focus your research on his writings? Now that I’m several years removed from my dissertation, I do kind of wonder how I managed to spend so much time studying someone as obnoxious as Rozanov. Many of his contemporaries considered Rozanov to be one of the most important writers of the Russian fin-de-siècle. He was extremely provocative both in his style and his philosophical statements, but what drew me to him was the fact that his literary persona seemed like it was basically designed to make him impossible to pin down to any consistent viewpoints. In truth, I picked him because I wanted the challenge.

What Russian masterpiece should everyone read? Asking a bibliophile to name just one book is like asking a mother to say which one of her kids she loves more. The answer is all of them. But if I’m really pressed, it’s Dostoevsky’s Crime and Punishment.

You have done academic research on vampires and even teach a course on vampires. Why is this topic important today? For centuries now, the figure of the vampire has been used as a metaphor for “otherness,” which is both fascinating and frightening. Although they don’t have reflections, vampires reflect societal anxieties about alterity, particularly in regard to gender, sexuality, race, religion and nationality. By studying vampire literature, we can find ways of dealing with those anxieties.

What is a favorite object in your office? I collect mugs from places I’ve traveled to or as mementos of things I’ve done. Since I drink so much coffee, they come in handy. My most valued mug is from Larkin St. Youth Services in San Francisco. I spent several years volunteer teaching there to help homeless young people receive their high school diplomas, and that experience has been quite transformative for the way I think about teaching and service.

When you are not teaching, what do you like to do? I hang out with my dogs, Sherlock and Sona. Their priorities in life are pretty much: eat, play, love. So, they help me relax and focus on the important things in life, like pizza. The three of us really like pizza.

Why should an undergraduate study Russian? There is a serious need for Russian experts and speakers of Russian in many professional fields, such as cybersecurity, business, the nonprofit sector and politics. Russian is and will continue to be a very practical language for working in today’s global economy. The College’s Russian Studies Program aims to train students for precisely this – by giving them the opportunity to become proficient in the language and to gain an understanding of Russia’s rich cultural heritage. We are constantly innovating to make sure that our courses serve students’ needs and help them be more competitive in the job market. For example, we have started to offer a learning community on Russian and cybersecurity each fall in collaboration with the Department of Computer Science.

What is your favorite Russian word? My favorite Russian words are the very ones that are impossible to translate. Certain words in Russian have very precise, nuanced meanings that are impossible to render in translation with one word. I like the word “mir.” It’s short and easy for students to learn, and it manages to pack two meanings into one syllable! “Mir” means both “world” and “peace” in Russian.