Having a love of learning is exactly what it sounds like – it’s a deep, passionate desire to explore the unknown and discover something new. That’s why a group of students under the guidance of College of Charleston mathematics professor Alex Kasman set out this summer to delve into the world of abstract equations.

Students Albert Serna, John Cobb and Monique Sparkman have spent the last two months investigating solitons (waves first seen on a Scottish canal in 1835 that behave like particles) which are described by quaternions (an abstract system of numbers discovered by mathematician William Rowan Hamilton as he walked beside an Irish canal in 1843 and now frequently used by aerospace engineers to describe spatial rotations).

The purpose of the project, says Kasman, was to create a summer research opportunity for students. 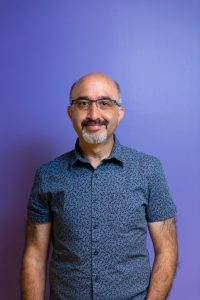 “My motivation was to find something that I didn’t know the answer to that I thought students could work on in the summer,” he says. “But actually, this is a question that I don’t think has been sufficiently studied. We have already made some surprising new discoveries about what happens when quaternionic solitons crash into each other.”

Kasman adds, “There are connections between these two phenomena aside from the coincidence that they were both discovered next to canals in Great Britain at about the same time.”

Serna, a graduate student pursuing a master’s degree in math, says the research has been a great way to see how two seemingly unrelated areas of math interact.

“A lot of math really just seems to be two very different things that you may not see a connection between coming together in unique and interesting ways,” he says.

Sparkman, a rising junior majoring in math, says the experience has been challenging, noting she “knew nothing” about solitons or quaternions before she signed onto this research project.

“I knew I wanted to do research in math, but I also knew I didn’t want to strictly focus on math,” says Sparkman, who is an Honors College student. “I liked this project because you can apply it to other fields, such as physics.”

Cobb, a rising senior who is triple-majoring in math, chemistry and data science, says he wanted to get more experience in a research setting, and the depth of the subject matter was appealing.

“It’s a cool way to see a lot of different types of math,” he says.

Each student is receiving financial support from the College to undertake summer research. The School of Sciences and Mathematics is supporting Cobb’s research. Serna has a paid research assistantship through the Graduate School, and Sparkman received a SURF (Summer Undergraduate Research with Faculty) grant through the Undergraduate Research and Creative Activities Program.

And for Serna and Cobb, the project has inspired further research that will extend well beyond the summer. Serna is using the group’s research as the basis for his master’s thesis. Similarly, Cobb is using the findings as the inspiration for his Honors College bachelor’s essay.

The research, says Kasman, isn’t about finding a practical application for these equations – it’s about pushing the boundaries of what’s known.

“Someday it might have a practical use in biology, physics or engineering, but today this is an exercise in seeing theoretically how these two things [quaternions and solitons] would interact,” says the math professor.

Simply put – they want to learn something new.