In the words of Danish physicist and Nobel Prize-winner Niels Bohr: “Technology has advanced more in the last 30 years than in the previous 2,000.” 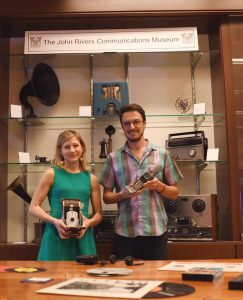 Many Cougars would agree. Social media and the smart phone technology underpinning it have changed our lives in ways both mundane and intimate. One could be forgiven for thinking we have truly entered a brave, new world.

But as the latest exhibit in Addlestone Library showcases, the desire to communicate and connect is anything but new. For centuries those human urges have inspired technology both bizarre and brilliant alike.

The John Rivers Communications Museum Exhibit offers visitors a chance to see first-hand this continuum. Located on the 3rd Floor of Addlestone Library, the exhibit features more than a dozen objects drawn from the namesake museum.

“Designed to represent each of the major areas of the John Rivers Communications Museum itself, this exhibit provides visitors an opportunity to consider and appreciate the design, function, and culture surrounding the intersection of electricity and communication,” says Sam Sfirri, the Libraries’ archival processing assistant. 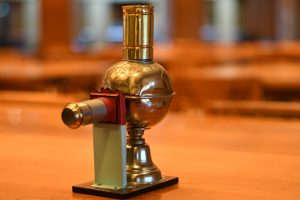 Others may be a little less so. Thomas Edison’s gramophone, a “Magic Lantern” image viewer, and an electrical telegraph transmitter date from that dim and distant period before the appearance of Homo smartphonecus.

The featured items are certainly dwarfed by their modern counterparts in terms of processing power and convenience. But, by placing these machines adjacent to one another, the exhibit makes it clear the change in our technology is primarily one of degree, not of kind.

“Looking at the exhibit as a whole, it’s remarkable to realize that the technology represented in these artifacts – despite being developed independently of one another by different people at different times and in different places – have been consolidated into the slim devices most of us carry in our back pocket,” Sfirri says.

The exhibit will run through June 2019. It is free and open to the public during regular library hours.