The Carolina Lowcountry and Atlantic World (CLAW) Program at the College of Charleston will host a three-film series exploring the cultural connections between South Carolina’s Gullah communities and Sierra Leone.

Located in the heart of the “Rice Coast” of West Africa, where people had been growing rice for centuries, Sierra Leone became inextricably tied to the South Carolina Lowcountry through transatlantic slave trade, says Simon Lewis, director of the CLAW Program.

“When European settlers here in Charles Towne realized that the conditions were good for growing rice here, too, the slave traders deliberately targeted the Rice Coast,” says Lewis, who is also director of the College’s African Studies Program. “Bunce Island on the Sierra Leone River became one of the chief points of departure for slave ships to Charleston in the 18th century.”

Many of the African-American families still in the Lowcountry today, says Lewis, would therefore have direct – if distant – genealogical ancestry in Sierra Leone. 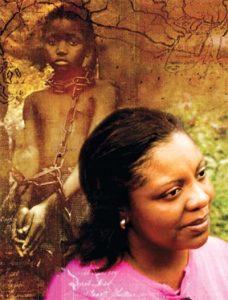 The Language You Cry In, the second film of the series, to be screened at 5 p.m. Thursday, Nov. 1, 2018, similarly documents a visit by a Lowcountry African American, Mary Moran to a remote part of Sierra Leone, where a particular village still sings a song that had been passed down to Moran from her enslaved ancestors. The film tells a remarkable story of historical sleuthing, and blends anthropological, ethno-musicological and linguistic research. Despite the violent rupture of the transatlantic slave trade, the story of this single song reveals how inextricably connected the Gullah Geechee are to their family across the sea.

The series culminates on Thursday, Nov. 8, 2018, with a premiere screening of Priscilla’s Legacy at 6 p.m. The film’s director and main subject, Thomalind Martin Polite, and historian and writer Edward Ball will discuss the connection between Sierra Leone and South Carolina through the legacy of the transatlantic slave trade.

Thomalind Polite’s documentary Priscilla’s Legacy offers the most intensely personal connection of the three films, recording Polite’s “homecoming” visit to Sierra Leone that she and her husband, Antawn, made in 2005. While working on his 1999 book Slaves in the Family, a book that assessed Ball’s legacy as the descendant of one of the most prominent slave-owning planter families in South Carolina, historian Ed Ball was able to trace a direct line connecting Polite back across seven generations to a young girl, known only as “Priscilla,” who was kidnapped, sold into slavery, and shipped from Bunce Island in Sierra Leone to Charleston. Priscilla arrived in Charleston in 1756 at the estimated age of 10. She was enslaved on one of the Ball family’s plantations at Comingtee in Berkeley County, not far from where Thomalind Polite lives today.

When Polite visited Sierra Leone in 2005, she was greeted as a long-lost daughter and met with almost saturation-level media coverage. Priscilla’s Legacy shows emotional footage from that visit and uses Polite’s experience as a dramatic example of the connection between South Carolina and Sierra Leone, Charleston and Freetown.

Following the screening, both Polite and Ball will discuss the film and their work to draw attention to the multiple, fraught legacies of the transatlantic slave trade.

All screenings will take place in Maybank Hall, room 100 on the College of Charleston campus. The screenings are free and open to the public.