English professor Joe Kelly didn’t start out writing a book about the history of Jamestown, Virginia. His project started out as an investigation of stories about shipwrecked castaways marooned on desert islands.

But the wreck of the sailing vessel Sea Venture in the Bermuda islands as it was heading for Jamestown in 1609 got Kelly thinking about the metaphorical marooning of the original settlers that landed on the shores of the James River in 1607. Culturally, socially and economically cut-off from life as they knew it in England a full 13 years before the pilgrims sailed across the Atlantic in the Mayflower to found Plymouth Rock, Kelly, in his new book Marooned: Jamestown, Shipwreck and a New History of America’s Origin, takes a closer look at one of America’s earliest settlements and how the settlers of Jamestown survived a life marooned in the Virginia wilderness. It was the grit and determination of those settlers at Jamestown that Kelly argues laid the groundwork for the American values we hold dear today.

The College Today caught up with Kelly ahead of the Thanksgiving holiday – which is based around America’s founding myth of the Pilgrims fleeing religious persecution to settle Plymouth Rock – to talk about why the Jamestown settlement should be elevated to the pantheon of American folklore.

What is so misunderstood about the story of Jamestown? 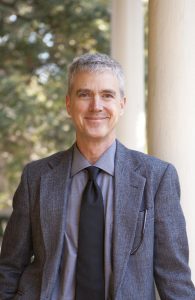 Jamestown is considered the red-headed step-child of America’s origin, especially when it’s compared to the golden child of the Pilgrim’s Plymouth Plantation. We all know the stories about discontent, unruly, good-for-nothing, gold-digging, idlers too lazy to even plant corn or toss a net into the river. That image is symbolized pretty effectively by the cannibalism of the notorious “Starving Time” at Jamestown.

But those narratives were written by Virginia Company men, and they blamed the wrong people. While the Company’s officers were busy trying to make money, the common settlers were inventing democracy. That’s what no one seems to have noticed for four centuries. If we read those narratives suspiciously, reading between the lines, interpreting with a healthy dose of skepticism, a completely different story emerges. The heroes of the tale become those discontents, the unruly mutineers who try to escape the hell that the corporation created on the James River.

Can you explain the meaning behind the title “Marooned”?

I’m really glad you asked that question. There’s the common understanding, of course, what we know from Robinson Crusoe or Pirates of the Caribbean. Someone is cast away, either by fate (a shipwreck, for example) or as punishment (pirates often marooned people rather than killing them), into a wilderness. They’re cut off. Obviously, that means you can’t drop by the grocery store. You’ve got to find your own food. You have to build your own house.

But you’re also cut off from the institutions of civil society. Especially if there’s more than one person castaway (and those are the most interesting tales), you’ve got to figure out how to get along, how to cooperate or compete. Just as you construct your huts out of the salvage of the wreck and the resources of the island, you’ve got to reconstruct civil society out of the salvaged ideas of the old world and the new ideas demanded by a threatening wilderness. That notion of salvage, which combines the useful things of the old world with those things demanded by the new world, is an important theme in the book.

But just as important is the more ancient meaning of “maroon.” The term comes from Spanish colonies in the new world. Originally, cimmarón, referred to domesticated cattle brought over to Hispaniola that escaped their pastures and ran wild in the hinterlands. Soon that word was used to refer to enslaved Africans who did the same thing: slipped the chains of the plantation and mine to escape into the nearly-inaccessible swamps and mountains of the interior.

Every Spanish colony – Hispaniola, Cuba, Jamaica, Panama, Cartagena, etc. – had its community of maroons living in the wilderness. The first inter-continental settlers in the U. S. were about 100 maroons fleeing Spanish slavery back in 1526. Right up to the end of the Civil War, maroons were living in the swamps of the Confederacy, including right here in Charleston, in places like Four Holes Swamp. These people were not hurled into the wilderness. They fled into the wilderness. Scholars – not only anthropologists but philosophers, theologians and historians – are only now coming to realize how these courageous acts of self-fashioning are the ultimate example of existential freedom.

The settlers of Jamestown were maroons in both these senses. They were hurled against their will into the wilderness. They suffered the incompetence, cruelty, and arbitrary “justice” of the Virginia Company. They took responsibility for their own lives and fled, courageously, into the wilderness.

The real story of Jamestown isn’t like Disney’s “Pocahontas.” What was the relationship really like between Jamestown’s settlers and the Native Americans? 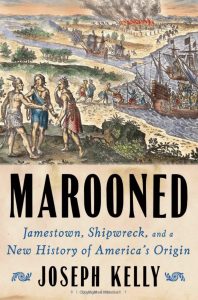 There’s three ways to answer that question. The official Virginia Company policy considered the “savages” (as they called them) to be at best simple-minded and child-like, and at worst devilish. They treated the Native Americans accordingly, with condescension. John Smith knew better. He adopted himself to the frontier, learning the Indian language and Indian ways of hunting, gathering, farming, and the ways of their civil society. He made himself into a paramount chief who rivaled the man we know as Powhatan. At the height of Smith’s power, he ruled a chiefdom that covered both sides of the James River from the bay to the freshwater falls near Richmond. But he did not last long: his rivals in the company conspired to kill him and nearly did, and they returned the colony to its disastrous policies of condescension.

But there was a third way. Dozens upon dozens of settlers – from the first summer in 1607 through the Fourth Resupply in 1611 – defected to the Indians, melted into the continent, and disappeared from history. These established what would become a “middle ground” of contact between civilizations, neither Native nor English.

How does this new perspective of Jamestown add to our understanding of the early shaping of American values and democracy?

I’ve been alluding to my dissatisfaction with the reigning myth of America’s origin – the Pilgrim story. Now, I know that we all realize history did not exactly happen the way the myth tells us it went. The Pilgrims were not exactly proponents of religious freedom, for instance – or freedom in any of its common forms. But the myth of their “city on a hill” remains. The problem with that myth is not the historical inaccuracy (though I don’t want to dismiss that). The bigger problem is with how that myth makes us think about ourselves. Essentially, our myth of origin is Exodus. A righteous people flee oppression, wander in the desert, suffer trials, before entering into the Promised Land. The Pilgrims thought of themselves this way –  as God’s chosen people – and that’s their legacy. The heart of the story is this promise to not be contaminated, to not be transformed, to not be corrupted by contact with the new world. They must keep faith to the old doctrine.

My book offers a new myth and a new way of thinking about what it means to be American. Sure, it’s more historically accurate. Democracy did not start with the government of low-church Protestant sects. It began on the frontier, as settlers who never imagined they’d be thrust into positions of political leadership, who never in a thousand years of English history would have been given any chance to be a leader, found themselves thrust into the role. As one proponent of the “frontier thesis” put it, “democracy presents itself, less as a bright possibility than as a brutal necessity.” But just as important, this myth of origin gives us a better way of thinking about America. Our nation is not based on a promise made to God, but on promises made to each other. And not just in the past. Each generation is cast into the wilderness and forced to find out for itself how to make civil society out of the salvage of the old world and the demands of the new.

We are not bound to stay true to some version of the past. We’re not the chosen people. We are maroons.

How did you go about researching this subject matter for the book?

From the very first year of Jamestown’s settlement, people were gathering and publishing documents related to the colony. The first compendium was part of a book published in 1625.  A scholar named Samuel Purchas published Hakluytus Posthumus or Purchas his Pilgrimes. Various books have come out since – even in the last decade – with many of the key documents. The others – even obscure things – can be found online, in places like Project Gutenberg.

I wasn’t working with any sources that others have not seen before me. I was re-interpreting those sources. Almost all of them were written by elites. For example, the main narratives about Jamestown’s early years were written by Edward Maria Wingfield, George Percy, and John Smith, who were all at one time the president of the colony: confirmed executives of the Virginia Company.

I’m telling the story from the point of view of the common settlers, not the gentlemen and barons.

Did anything from your research surprise you?

It’s hard to name all the things that surprised me.

For instance, what the English called a “wilderness” was no wilderness at all. The Chesapeake watershed was thoroughly humanized – an ecosystem manipulated and regulated by the Algonquians who inhabited the territory. But by far the biggest surprise was something no one else seems to have noticed. One of the supposed villains of the Sea Venture story is the most important founding father you’ve never heard of, a failed-farmer, sometime inn-keeper named Stephen Hopkins.

It turns out that all of our notions of the social contract – from Hobbes through Locke and Rousseau – were pioneered by this humble, uneducated, but naturally articulate castaway. Marooned on Bermuda, he draws most of the other castaways into a conspiracy with arguments that sound a lot like the self-evident truths we know from the Declaration of Independence.