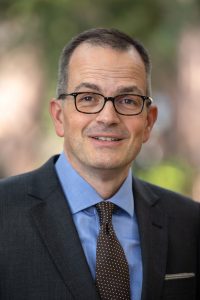 McGee, who has served in a variety of academic and administrative posts at the College since 2004, will remain in his current role as provost and executive vice president of academic affairs until June 30, 2019. “The College of Charleston has been my intellectual home for the majority of my career,” McGee said. “I have grown enormously and learned a great deal from my colleagues and friends in Charleston. Whatever I might accomplish in the future will be the result of my time at this special place.” Beginning his tenure at the College in 2004 as an associate professor of communication, McGee served for six years as chair of the Department of Communication and four years as chief of staff and senior vice president for executive administration in the Office of the President. Prior to being named provost and executive vice president of Academic Affairs in October 2015, he served in that role in an interim capacity for one year. “Provost McGee has served the College of Charleston faithfully for nearly 15 years,” said Interim President Stephen C. Osborne ’73. “He is a top-notch academic who cares deeply about student success. I know he will be an excellent president at Quincy University, as he has been preparing for this opportunity his entire professional career. Our loss is certainly Quincy’s gain. We will miss Provost McGee.” McGee earned bachelor’s and master’s degrees in speech communication from Southern Illinois University–Carbondale and a doctorate in communication from The Ohio State University. An expert in debate and political communication, McGee’s previous faculty appointments were at the University of Louisiana-Monroe, Texas Tech University, and Spalding University. With two children, Emily and Brandon, who are current CofC students, McGee described his time at the College as a tremendous honor. “For the influence and example over the years of College of Charleston trustees, presidents, provosts, vice presidents, deans, faculty colleagues, staff, volunteer leaders, alumni, and especially our undergraduate and graduate students, I am deeply grateful,” he said. “I am now, and will always proudly be, a College of Charleston Cougar.”