For IT Staffer, Holiday Gingerbread is a Work of Art

When Teena Ham was called into former College of Charleston Chief Information Officer Bob Cape’s office in 2013, she wondered what she’d done wrong.

“I walked in, and his back was to me as he put a piece of paper in the printer,” recalls Ham, who has worked in the College’s Division of Information Technology for 10 years. “He said, ‘I’ll be with you in just a minute.’ He printed out a form, turned around, handed it to me and said ‘I think you know what to do with this.’” 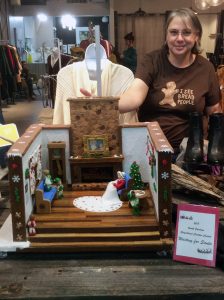 Teena Ham with her 2018 submission to the South Carolina Gingerbread Creation Contest “Waiting for Santa.”(Photos provided)

It was an entry form to compete in the National Gingerbread House Competition at the Grove Park Inn in Asheville, North Carolina. Ham was known around the IT offices for her baking and cake-decorating skills, and Cape, who went to the inn every year to see the fabulous gingerbread creations, had been goading her to enter for years. This time he was determined that she say “yes.”

So, in 2013, Ham entered the national gingerbread contest with a confection creation titled “A Treemendous Christmas,” which depicted a young boy waking up on Christmas morning to find himself inside his dream tree house.

“I had no idea there was such a thing as construction-grade gingerbread,” she jokes, noting that the competition at Grove Park Inn requires everything in a contestant’s entry to be edible.

It just took once: Ham was hooked on the adrenaline rush that comes from competing in one of the country’s premier holiday baking competitions. She’s entered every year since, except for this year when she opted to enter the South Carolina Gingerbread Creation Contest in Summerville, South Carolina, after she ran out of time to perfect this year’s masterpiece, dubbed “Waiting for Santa,” a scene of Mrs. Claus and elves waiting for Santa Claus to come home on Christmas night.

“I think I’m addicted to the challenge,” laughs Ham, who taught Wilton cake-decorating courses in North Charleston for more than five years. 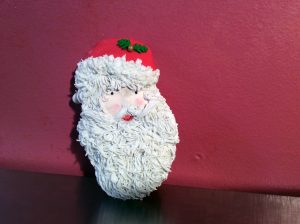 A Santa Claus figurine that was part of a previous year’s submission to the national gingerbread contest.

Make no mistake, we aren’t talking about gingerbread houses like the ones you made at your grandma’s. Ham starts developing a theme for her gingerbread designs nearly a year out from the national competition, which is held annually in November. She begins making some of the smaller, more detailed pieces, such as figurines and furniture, over the summer. Then, in late September, she ramps up production with the baking of the gingerbread and construction of the display.

In the case of one Santa Claus figurine she made a few years ago, Ham individually placed each fondant hair on Santa’s beard. It took her a week to make. 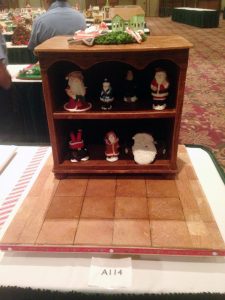 A submission to the national gingerbread content titled “The Collection.”

But, in her mind, she’s got a ways to go before she’ll be in the top 10 at Grove Park – her long-term goal.

“I am not near the caliber that the top competitors at Grove Park are, but I’m getting better every year,” says Ham, who works as the College’s IT Training Program coordinator. “I don’t think people realize how extreme the National Gingerbread Competition is. Competitors use wood working tools like saws, sanders and Dremel tools when turning their bread into a work of art.”

She adds, “There’s a great group of competitors there. They are super sweet and helpful. You learn a lot.”

Thinking about making your own gingerbread house this holiday season? Ham says have a variety of candy on hand for a bevy of decorating choices. And to do it like the pros, Ham says decorate the walls of your gingerbread house while they’re laying flat. Then let them set over the course of a day before putting them up.

“If anyone does have the chance; I really suggest that you do build and decorate a gingerbread house,” she says. “The time spent with others is priceless. And have fun – it’s supposed to be fun!”

You can see Ham’s gingerbread work, along with other submissions, on display in the South Carolina Gingerbread Creation Contest at shops and restaurants in downtown Summerville through the month of December.

Featured image: A working marble game made completely of gingerbread and other edible materials that Teena Ham submitted to the National Gingerbread House Competition last year.