By Tom Cunneff|2020-02-25T12:56:45-05:00December 11, 2018|Academics|Comments Off on Alumna Honors Parents, Sister With Chemistry Scholarship
Angela Lindner ’83 has been with the University of Florida for 20 years, starting as an assistant professor in the Department of Environmental Sciences before rising to associate dean of student affairs in the College of Engineering. For the last three years, she has been the associate provost for undergraduate affairs. But as much she loves being a Gator, she will always be a Cougar at heart. While she may be incredibly busy at UF, where she oversees anything having to do with undergraduate academics, she still finds time to give back to the College of Charleston. 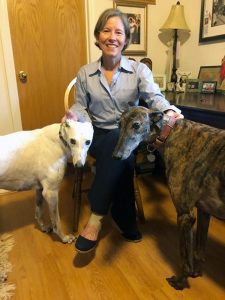 “As I get older, I’ve become a lot more grateful to what I was privileged to experience at the College,” she says, sitting in her home office at her ranch-style home in Gainesville, Florida, two rescue greyhounds at her feet. “The fact is, at the College of Charleston, learning matters most. Every faculty member cared that we learned. They also realized that our learning comes only if we connect meaningfully with faculty. Those of us in academia know it’s the single most important factor, and the College of Charleston gets it.” Thanks to Lindner and the Blalock-Stephenson-Stirling Endowed Undergraduate Research Award in Chemistry she created, some students have been able to conduct summer research projects since 2003; students like Heather Lieb, who spent this past summer investigating silver nanoparticles, which are used in athletic wear and medical garb for their antimicrobial properties. “Unfortunately, these particles escape when these materials are washed, and because of their size, they surpass waste water treatment filtration and leech into marine ecosystems,” says the senior chemistry major. “We have developed a method to test the neutralization of these nanoparticles by sulfidation; this process occurs naturally in the environment, but we need to know to what extent.” The financial support to pursue such research, says Lieb, was greatly appreciated. “I am very passionate about my research and this donation helped me tremendously because I have been working a lot in order to make ends meet,” she says, adding, “this donation allowed me to invest more time into my research.” The Blalock-Stephenson-Stirling scholarship combines two previously established research funds by Lindner, who majored in chemistry at the College. Blalock was her mother’s maiden name, while Stephenson is her family name and Stirling is her sister’s married name. Her dad, Ralph, an accountant, succumbed to non-Hodgkin’s lymphoma in 2000 at age 75, while her sister, Katy, a schoolteacher, passed away a year later at age 43 from an adenocarcinoma. Both of them, along with her mother, a homemaker who passed away in 2008, stayed with Lindner and her husband, Jim, while receiving treatment at UF’s renowned Shands Cancer Center. “We got back-to-back slams,” remembers Lindner, astounded by the odds that both her dad and sister would get cancer within a year of one another. “We kept muttering that through all of it as we tried to stay positive. The week before Dad passed away, I was in my office taking a break from visiting him when Katy called me to tell me she was diagnosed with terminal cancer and I just thought, ‘How do I tell my mother?’ Her husband is dying in the hospital and now her daughter.” Katy’s surgery in Greenville, South Carolina, was the same day the family buried Ralph in Orangeburg, South Carolina. “It was one of those life transformational times and we were determined that new life would come from this,” recalls Lindner, who also created the Chemistry Catalyst Award, a micro-grant program for financial emergencies, at CofC. “They were both beautiful people. I had some funding from both, and I wanted to use it to honor them and bring new life from this terrible circumstance that we had. It also worked in some of my passion about the College of Charleston and undergrad research.” Lieb’s investigation of silver nanoparticles is just the kind of environmental research Lindner hoped the scholarships would foster. “When I was thinking about some of the funds from their passing, I kind of synthesized what they loved and how to connect it meaningfully to the chemistry department at the College,” says Lindner, who grew up in Orangeburg, and whose brother, Ralph Stephenson Jr. ’78, also graduated from the College. “We spent a lot of time outside, as South Carolinians typically do. It honors their love for the outdoors and connects that to my heart at the chemistry department at CofC,” says Lindner. “Their spirit is existent in this fund and I am so grateful to have set this up and continue to support it. My hope is that this story may awaken the hearts of those reading it and think, ‘You know, I can do that with my major, too.’” Featured image: Chemistry major Heather Lieb in a College of Charleston lab. (Photo by Kate Mullaugh, assistant professor of chemistry and biochemistry)