At the first tournament of the fall season in September, the men’s golf team won in dramatic fashion in a one-hole playoff over SMU at The Invitational at The Ocean Course at Kiawah Island Golf Resort. Not only was it the team’s first win in its own event since the tournament’s inception in 2010, it was also the first tournament under new coach Mitch Krywulycz (CRY-vole-ITCH).

“To welcome Coach K to our program like that was huge,” says Hunter Dunagan, whose birdie in the playoff was the key to the victory.

“Winning our first event of the year, at home – and my first event for CofC – was truly special,” says Krywulycz, a native of Australia who previously was the assistant men’s coach at Purdue University. “The greatest thing to come from that victory was seeing the look on our players’ faces after the playoff win. They beat a Top 10 team in the country head-to-head. They proved to themselves they could truly compete on a national stage, and I will never let them forget that.”

“I love college golf,” he says. “Augusta is a huge reason why I’m in coaching because I really enjoyed my time there. If you look at the Top 25 teams, you might find one or two mid-major programs. What the College of Charleston can be is very similar to what Augusta State was seven or eight years ago.”

The men look poised to capture their fifth CAA Championship in the last six years this spring and have a good chance to make the National Championship out of regionals – something they haven’t done since 2001.

“It is no secret that our team loves playing under Coach K’s leadership,” says junior Michael Sass. “He has created such a positive energy at practice each day that pushes us and gives us confidence to improve and be the best players we can possibly be.”

The men’s team bookended their four-tournament fall season with another win at Kiawah in November at the CSU East Bay Deli Classic and finished the fall ranked 31st in the Bushnell Golfweek Coaches Poll. 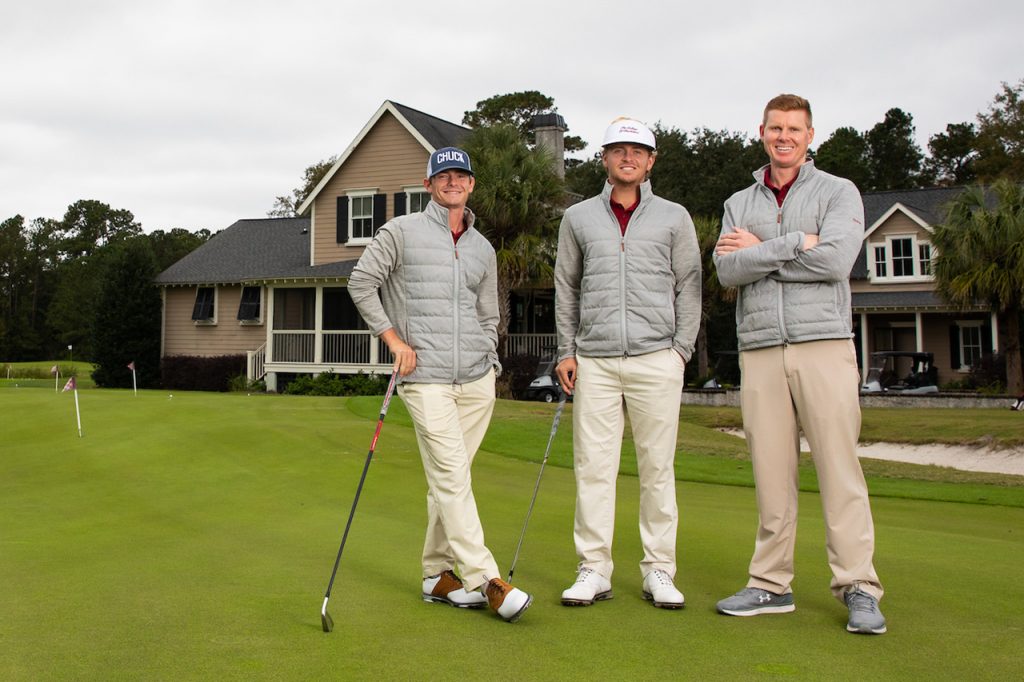 Not to be overshadowed, the women’s team won their last event of the year at Kiawah, too, in the Palmetto Intercollegiate, shooting the lowest 54-hole total in program history. This came right after three straight top-three finishes in their five fall tournaments and capturing the CAA Championship last May – the third in five years.

“Winning the last tournament of the fall individually and as a team has our confidence up going into the spring to do some big things,” says junior Victoria Huskey. “We have an extremely competitive top five, and that has pushed me to try to get even better every week.”

In his 23 years as the women’s golf coach, Jamie Futrell has never seen a team improve more from last fall to this fall. “We had a great deal of talent, but it was a very young team that had lost the program’s best player of all time, Laura Fuenfstueck, to graduation in May of 2017,” he says. “Watching this team mature from a team looking for an identity and game to a championship team was possibly my most satisfying season of all time.”

After victories over the likes of Baylor, Indiana, Kansas, North Carolina, N.C. State, Penn State and Tennessee, the women’s team finished the fall ranked 36th in the Golfstat Rankings. Their goal now is simply to become the best team ever and make it to the National Championship, which they’ve never done except for when Fuenfstueck did so individually in 2017.

“The golf teams have had success for decades,” says Athletics Director Matt Roberts. “But the difference now is we’re entering the spring with both teams having won tournaments and comprehensive success up and down the lineup against nationally ranked opponents. We haven’t recently done that in unison in the fall season.”

And with only two seniors on the women’s team and none on the men’s, the squads are only going to get better in the future.

“We’re building toward two programs that should be highly ranked nationally and advance to the national championship every year,” adds Roberts. “That’s our goal: to try and break through that ceiling.”