Inside the Zucker Family Sea Turtle Recovery Center at the South Carolina Aquarium in Charleston, sea turtle biologist Cait Crosby places a handful of green-leaf lettuce into a crack on a foot-long piece of PVC pipe and drops it in a tank, where it slowly sinks to the bottom. Ginny, a dinner-plate size green sea turtle recovering from debilitated turtle syndrome, quickly dives down and starts munching on the leaves as aquarium visitors ooh and aah from behind the thick glass and acrylic wall. 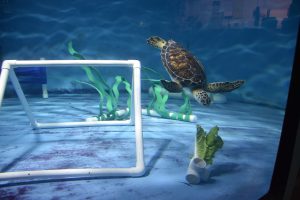 A sea turtle dives down to eat lettuce grown from the College’s student garden. (Photo provided by the South Carolina Aquarium.)

Now that’s what you call a salad bar! And an organic one, too, thanks in part to the College’s Student Garden at Stono Preserve, which donates lettuce to the aquarium. Typically, a green turtle at the aquarium eats about 5 percent of its body weight or more per day in lettuce, which is placed into the PVC pipe so the turtles can “forage” like in the wild. For Ginny, that adds up to about half a pound daily.

“Organic lettuce can be pretty expensive if we have to buy it at the market, so it’s really great to have this partnership with CofC,” says biologist Willow Melamet, who manages the care center. “The lettuce is vital in helping the turtles get back to full strength.”

The partnership began in the summer of 2017, when the aquarium board meeting was held at Stono, and the members got a tour of the Student Garden, which is funded through a grant from The Golden Pearl Foundation.

“The board was thrilled that we grew all organic produce, never using any herbicides or pesticides of any kind,” says Lucy Davis, the coordinator of the Sustainable Agriculture Program, which is part of the Graduate Program in Environmental Studies at the College. “We were looking for ways to promote sustainable agriculture and eating locally and to increase community engagement, and, as fate would have it, they had just had their grand opening of the sea turtle hospital and were in search of finding fresh, organically grown veggies to feed their sea turtles.”