How Students Communicate With Laptop Stickers

While walking under the Spanish moss throughout the College of Charleston campus – and maybe even doing the “Charleston-shuffle” on a brick or two – something new and colorful stands out on the periphery. You’ll see students sporting them outside Addlestone Library on Rivers Green, on the couches and in the study nooks of the Stern Center, and propped on the desks in most classrooms: Laptop stickers are the latest craze, and they’re not just for dressing up those sleek grey Macs. Laptop stickers enable students to express their individuality, and they can also help connect classmates with similar interests. 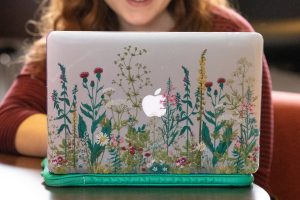 Formerly bare and identical-looking, student laptops are now covered from top to bottom with stickers or “skins” that resonate with students. Stickers seen around campus call out everything from niche TV shows and movie references to local stores and coffee shop logos and even life mottos. You might even see all of these categories on one laptop. Some sport just a few carefully selected stickers, while others choose to plaster their laptops without leaving a sliver of blank space.

So what’s with all the stickers? And what is their significance from a sociological perspective? The College Today sought out some faculty and students to help answer these questions.

Idee Winfield, a professor of sociology at the College, suggests that our society’s shift to digital media has changed the way we present ourselves to others. Developing an online presence on social media is one way of forming a public identity, but there is also something to be said about the way we decorate the outside of our laptops.

“Laptop stickers are not just an expression of our personal identity, but a way in which we selectively communicate to others,” says Winfield. “The stickers allow us to make an impression on others without actually saying anything, which is similar to how the clothes we wear shape our sense of identity.”

Winfield categorizes the sticker phenomenon within Impression Management Theory – a sociological theory that explains how we attempt to control the way others perceive us to align with our personal goals. The specific stickers that we place on our laptops portray the identity we want others to associate us with.

“People are less likely to strike up conversation with others on the street because so much of life is mediated through the internet,” Winfield says. “Students use laptop stickers because they want them to say something to others.” 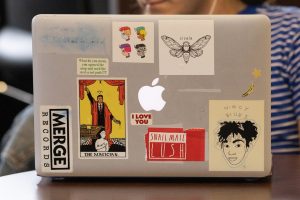 So, there you have it; that laptop sticker you have of Michael Scott from The Office does more than just make you laugh – it actually contributes to your identity perception. Given the prevalence of laptop stickers around campus, it’s easy to find CofC students to discuss what their own stickers mean to them.

Noah Albertsen, a senior majoring in computing in the arts and minoring in Italian studies, says most of his laptop stickers were initially purchased without the intent of placing them on his laptop.

“From the stickers that I had, I chose them based on my opinion of the brand or message expressed by the sticker,” Albertsen says, citing his “Proud to be a Democrat,” “Grand Canyon” and “Jeni’s Splendid Ice Creams” stickers as examples of topics that resonate with him.

“The stickers are a great way to remind yourself that we’re all sharing interests and values, reminding me we’re all more similar than we are different,” Collins says. “They’re also great conversation-starters for college kids particularly, and you never know what sticker might introduce you to a new friend!”

While the longevity of laptop stickers remains to be seen, we can be certain that they’ve already changed the way CofC students express themselves and connect with their classmates. So the next time you decide to put a sticker on your laptop, consider what message you are trying to project about yourself. Most importantly, be proud of what interests you, even if it’s unpopular or unique, because you never know who else might think the same way as you.

Kelsey Baum is a senior from New Jersey studying Communication and Italian Studies at the College of Charleston. She is also a member of the Martin Scholars Program and a freelance writer for Her Campus.