German Ambassador to the U.S., Emily Haber, visited the College of Charleston campus on Friday, Jan. 18, 2019, as a guest of the Department of German and Russian Studies, the School of Languages, Cultures and World Affairs, and the College’s Center for the Global Alliance of South Carolina. 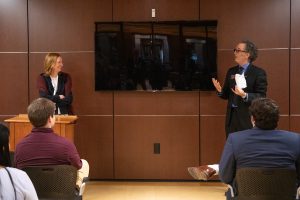 The reputation of the German department at CofC and the diplomatic connections of the school’s Associate Dean Jim Melville, a former ambassador to Estonia, attracted Haber to visit the campus. She remarked that students graduating from the College are “incredibly sought-after” in German businesses. During her visit she held a discussion session with students and then spoke with industry and College leaders at a reception in her honor.

German and Russian studies chair Morgan Koerner said, “Ambassador Haber’s visit underscores Charleston’s and South Carolina’s strong collaboration with the Federal Republic of Germany. With over 160 German companies and over 32,000 jobs statewide coming directly from German industry, South Carolina receives more investment per capita from Germany than any other state in the nation. In this context, the Lowcountry’s growing industrial sector and the Port of Charleston play a critical role. And the Ambassador’s insistence on holding a Q&A session with our international studies and German majors is an excellent reminder of the need for global fluency among the next generation!” 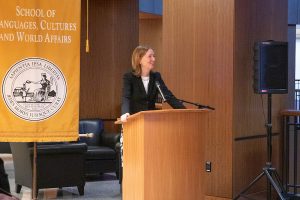 German Ambassador Emily Haber speaks with students at an event on Jan. 18, 2019.

Senior Timothy Housand was in the audience and said that as a political science and German double major, he wants to work in foreign service. Housand recently interned in Erfurt, Germany, researching tech startups and solar panel companies, as part of the CofC’s Cultural Vistas Internship to Germany Program.

In her talk with students, Haber jumped right into answering student questions on border sharing, Brexit, free trade, deglobalization, tariffs on German companies and trade with the State of South Carolina.

When one student asked Haber what it’s like to be a female ambassador in a male-dominated field, she responded, “Ignore obstacles. Be content with what you think is right. Have courage and enjoy what you do.”