“I have something to tell you, and you’re not going to like it,” Phil Jos told his friend and colleague, John Creed. “But you have no choice.”

The two College of Charleston political science faculty members – who met as Ph.D. students at the University of South Carolina more than 35 years ago – had just sat down for dinner at Moe’s Crosstown in downtown Charleston. That’s when Jos delivered the news: He had officially established the John Creed Award in his friend’s honor. 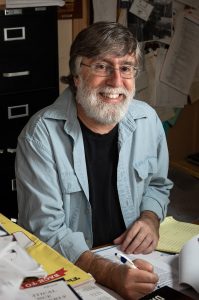 “I had no idea that that was what was coming,” says Creed, associate professor of political science, who – as Jos had known he would be – is reluctant to accept recognition for his exceptional career of teaching and impacting students. “It’s still hard to get my head around it, honestly. It’s just so humbling. It’s also such a quintessentially ‘Phil Jos’ thing to do – both because he thought of crediting someone other than himself and because of the initiative he took and the generosity it shows. This initiative is really his. This isn’t about me.”

But, of course, it is. Meant to extend opportunities to juniors and seniors who share Creed’s passion for learning outside of the classroom, the John Creed Award honors Creed’s commitment to student learning, intellectual curiosity, global awareness and personal development.

“John is all-in in terms of teaching – his dedication is extraordinary,” says Jos, professor emeritus of political science. “His classes are well prepared, he stays current on a myriad of topics and is constantly pulling what is immediate and relevant for students into this impressive scholarly foundation that he has.”

Creed’s work in the classroom and as a faculty advisor is so exceptional, in fact, that he has received the College’s Distinguished Advising Award and has been named the ExCEL Outstanding Faculty of the Year in Humanities and Social Sciences and the Higdon Leadership Center’s Faculty Student Group Advisor of the Year. And – as any of his former students will tell you – it was all well deserved.

“I have never had a teacher that left as indelible a mark on my educational experience as Dr. Creed did,” says Anne Wallice ’11, who is now a lawyer in New York City. “His classes and advising inspired me to think thoughtfully and deeply about the world around me.”

“Dr. Creed’s breadth of knowledge and ability to bring issues alive made me rethink what was possible in higher education,” agrees Jackson Ewing ’03, an adjunct associate professor in Duke University’s Sanford School of Public Policy, who took as many of Creed’s courses as possible while he was at the College. “Two degrees later, and having worked as a university educator on three continents, I’ve still never known a more compelling and effective professor than Dr. Creed.”

That, says Jos, is because Creed really, truly cares.

“It might be easy to be nice to students and make them your friends, but it’s really hard to engage them in a way that shows care and attention to them and still hold them accountable for the kind of rigorous studies John demands,” says Jos. “That’s what John does: He cares with rigor.”

The goal, says Creed, is for students to be pushed so they can learn something new.

“I want students to feel like they’re being challenged – to recognize their ability to meet those challenges – so they can rise to their highest potentials,” he says. “I want to help them develop both intellectually and personally so that they are able to pursue opportunities that they never knew were there.”

And – by providing opportunities like internships, study abroad, research, conference presentations and workshops for students who might not otherwise have the resources – that’s exactly what the John Creed Award will do.

“The purpose of this award is to provide access to educational opportunities that students otherwise might not have,” Creed says. “That’s always been a commitment of Phil’s, and he instilled that in me. It’s nice to think that it will continue to be a commitment of the department going forward.”

And, opening up students’ minds to their own possibilities is Creed’s ultimate goal.

“That’s the great thing about my job: when they recognize their own abilities,” says Creed, who came to the College in 1992. “Simply to see students grow and attain the confidence that they can do whatever they want to do, and to know you had a part in planting the seeds for that: That’s what’s been the most meaningful part of teaching for me.”

And, thanks to the John Creed Award, such opportunities are now even more within students’ reach – something that Creed himself is unequivocally grateful for, even if he is reluctant to take the credit.

“I’m always acutely aware of the shoulders I stand on and what they’ve built, and I know I wouldn’t be able to do half the things I do at the College if it weren’t for Phil and my colleagues,” he says. “I’m hoping students will continue to be able to benefit from all the love and work the faculty before me has put into teaching political science at the College. I’m only one of many.”

That may be so, but Creed’s colleagues and former students agree that he stands out.

“I can think of few people who are more deserving of such an award in their honor than Dr. Creed,” says Wallice. “This award is certainly a testament to the impact Dr. Creed has on his students, and hopefully will even further expand that impact.”

To honor Creed’s legacy and further his remarkable impact on political science students, you are invited to support the John Creed Award.