If there is a clear constant for James Mulvaney and his family, it may likely be a commitment to education. After all, the Mulvaneys count among their ranks career educators, such as James’ wife Carol and his daughter Christine, and other family members, like his late father William and son Patrick, who have demonstrated a deep interest in teaching those around them.

At the College of Charleston, the Mulvaney Family has made a vested commitment to furthering the education field by way of their philanthropy. In 2016, they established the William and James Mulvaney Family Endowed Scholarship to support a declared education major at the College of Charleston in the School of Education, Health, and Human Performance.

James Mulvaney first came to appreciate the importance of education from his father, who is recognized in the scholarship’s name. 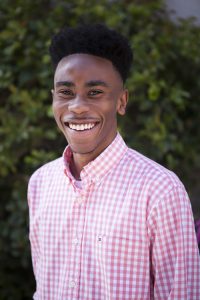 Middle grades education major Rodrick Bellamy is a recipient of the Mulvaney Scholarship.

A renowned urologist in Cincinnati, William Mulvaney developed two drugs to dissolve kidney stones. He then placed the proceeds from that work in a charitable trust, which is managed by James Mulvaney and his siblings. The endowed scholarship at the College of Charleston was created with a $150,000 donation from the trust.

“He felt that everyone should be treated the same and have the same opportunities,” says James Mulvaney of his father, recalling how as a child he had observed the physician treating everyone at the hospital with equal respect.

William Mulvaney was also pioneering in his championing of diversity, often breaking new ground in his hiring of minorities in the Ohio medical community. In light of this, the scholarship endeavors to provide support in particular to minority, male undergraduate students at the College who are majoring in middle grades education.

The Ohio-based family discovered the College when their son Patrick Mulvaney ’10 and daughter Christine Mulvaney ’16 both chose the school for their undergraduate studies. When Christine, a middle grades education major, graduated in May of 2016, her parents attended the Commencement Celebration and Awards Ceremony of the School of Education, Health, and Human Performance. After hearing Dean Fran Welch’s speech at commencement, the idea came to the family to create the scholarship.

“We chose the College of Charleston because of the experiences of our two children and our dad’s belief in the importance of a good education,” says James Mulvaney, who visited the campus regularly when his children were pursuing their undergraduate degrees.

“This generous gift by James Mulvaney and his family supports one of our major objectives in the School of Education, Health, and Human Performance, which is to prepare and produce exceptional minority teachers,” says Welch. “We have talented and diverse students in our teacher education programs, and assistance through the Mulvaney Scholarship will provide much needed funds so that our minority students are able to continue their academic pursuits in order to ultimately make an impact in classrooms across South Carolina and beyond.”

Scholarship recipient Rodrick Bellamy understands well the importance of students finding a mentor with whom they can identify. As an African-American high school student in Conway, South Carolina, he came upon few educators who shared his background.

“I had one black male teacher in middle school,” says Bellamy.

That teacher nurtured his love of math, playing an invaluable role in shaping Bellamy’s future. What’s more, his very presence in the classroom illustrated to the young student that he, too, could cultivate a career from his favorite topic. Now, the middle grades education major plans to teach in the tri-county area after graduating in the spring of 2019.

“It’s a really important part of our development,” Bellamy says of this key period in a person’s educational journey. “A teacher can have a really big impact on that part of a student’s life.”

To support minority male students majoring in education, you are invited to support the William and James Mulvaney Family Endowed Scholarship.

Featured image: The Mulvaney family at Christine Mulvaney’s graduation from the College of Charleston in 2016. (Photo provided)