Here in Charleston, South Carolina, “hero” might not be the word most commonly used to describe rats. In Tanzania, however, an organization that trains rats to detect landmines and tuberculous has nicknamed the rodents “HeroRATs.”

Since graduating last May with a degree in psychology, Ellie Cutright ’18 has been working for Belgian-based nonprofit APOPO (which in Dutch stands for Anti-Persoonsmijnen Ontmijnende Product Ontwikkeling and translates to Anti-Personnel Landmine Detection Product Development). She’s a research technician training African giant pouched rats at the organization’s training and research center in Morogoro, Tanzania. The African giant pouched rat gets its name from the large pouches in its cheeks. 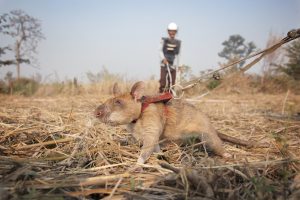 An APOPO rat checking for landmines.

“I have been a rat lover since having them as pets in childhood, and thought it was great to see a company showcase the potential that rats have and work to end the stigma surrounding them,” Cutright says.

To date, these highly intelligent HeroRATs have cleared over 107,000 landmines and unexploded ordnance from eight countries and continue to work toward increasing detection rates of tuberculosis. Due to their small size, trainability and superior olfactory system, the rats are able to efficiently and safely detect landmines. An APOPO rat can check an area the size of a tennis court for landmines in 30 minutes. Using a metal detector to clear the same amount of space would take several days. Similarly, while detecting TB, the rats can precisely sniff out the disease at a rate of 100 sputum samples per 20 minutes. It would take a lab technician using traditional methods up to four days to screen the same number of samples for TB.

In addition to Cutright’s love of rats, her experience performing collaborative research with faculty and students in the College’s Department of Psychology helped solidify her interest in animal behavioral research as a career.

“While doing research in the psychology department, I gained a lot of experience working with software needed to operate various apparatuses, using statistical packages, writing APA style manuscripts, developing the patience needed to work with animals and so much more,” she says. “The skills I learned while working in the lab, the classroom and as a student are invaluable – and undoubtedly helped me to be a suitable candidate for my job at APOPO.” 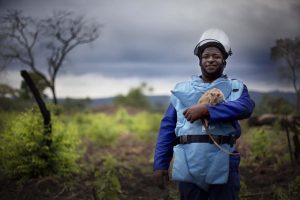 An APOPO rat with its handler. (Photos provided by APOPO)

Cutright isn’t the only APOPO employee who loves and values rats. Due to APOPO’s priority for animal welfare, all APOPO employees treat the rats just like the heroes that they are.

“Our rats are fed fresh, locally sourced produce and even get extra portions on Fridays, which is an adorable event we call ‘Full Cheek Friday,’” Cutright says. “The working rats wear sunscreen to protect their ears and tails from the sun, live in well-maintained kennels, receive lots of affection from staff members, get weekly vet checks and are given plenty of outdoor play time.”

Retired rats even go on to live in a retirement villa.

This year, Cutright plans to begin working on a new project for APOPO attempting to train the HeroRATs to detect brucellosis, an infectious disease caused by bacteria found in unpasteurized dairy products. The organization also hopes to expand its program to address other global issues through their rat-detection technology.

Cutright has words of advice for students thinking about their careers after college: “It is really important to find something you know you love doing and stick with it. I knew I loved working with rats and working with them in a setting in which they are well treated. Those types of opportunities are hard to come by, but it’s worth it to pursue and not settle for something you don’t love. When you find professors you like, take all of their classes and work to build a good relationship with them because that will open a lot of doors for you.”

Featured image: Ellie Cutright ’18 with one of the African giant pouched rats she trains in Tanzania.