It’s unlikely that you’ve heard of Peterson Toscano. It’s even more unlikely that you’ve ever encountered anyone quite like him. Self-described as a “quirky, queer Quaker,” Toscano travels the country and the world offering one-man shows that he refers to as “performance lectures.” These presentations engage audiences with Toscano’s playful observations of serious topics such as gender, religion and climate change. And he’ll be doing that on Wednesday, Feb. 13, 2019, at 7 p.m. at the College of Charleston’s Thaddeus Street Education Center, Room 118, courtesy of the Sustainability Literacy Institute, the First Year Experience and the Office of Institutional Diversity.

Toscano’s unusual background – he spent 17 years and over $30,000 on three continents attempting to change and suppress his same-sex orientation and gender differences – strongly influences his comic storytelling. But he’s also a recognized biblical scholar who examines gender variance in the Bible and has much to say about climate change.

The talk Toscano will give at the College is entitled “Everything is Connected: An Evening of Stories, Most Weird, Many True.” When he speaks about climate change as a human rights issue and an LGBTQ+ issue, the intent of that title will begin to become clear.

The College Today caught up with Toscano to ask about his work and the issues that concern him most. 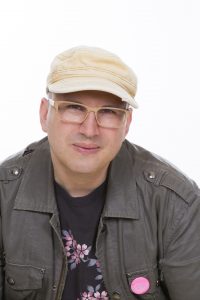 The combination of artist and scholar chose me. Add to that mix that I am also an activist – someone who wants to make society a better place for all. These three competing passions are equally important to me. They energize my work as they tug and pull at each other. As a solo theatrical performance artist, I have regularly drawn on my own personal experiences, but I need to give audiences more than autobiography. The work would be so shallow if it was just about me. By weaving in scholarship – be it from the Bible, literature, climate science or just random facts – it keeps me curious as it deepens the work.

Sometimes the scholarship serves as a metaphor for a message I am trying to communicate through my art and storytelling. For instance, I tell Bible stories as a way to explore gender differences and complex identities. I seek to weave together images, personal narratives, data and scholarship to create a synthesis that informs and moves audiences.

Your work combines human rights and comedy. How do those complement each other to generate a deeper understanding of each?

I was asked a similar question for the Washington Square News at New York University. I need to first find the humor in myself. Take my conversion therapy experience for example. It is traumatic, but it’s also ridiculous. While it’s easy to make fun of the people who are running these programs, I had to look at myself and find what was ridiculous in myself. The other part of it is the commitment to be nonviolent. Humor can be violent, right? You can really attack people with humor. So I tried to create characters that I like, that I have an affection for, and I never try to hurt someone with my humor. Humor can be dismissive, and I’m not trying to make light of issues; I’m trying to shed light on them.

Also, humor is one of those things where everyone has their own tastes. That’s something else I have to be aware of – it doesn’t work for everybody. There will be people who will walk away, who even think it’s too serious of an issue and that I shouldn’t use comedy. To which I say, well, maybe you shouldn’t come to my show. Go to a traditional lecture, you might like that better.

Many Gen Z individuals (most of today’s college students), blame previous generations for the fact that they’re facing a challenging future regarding the impacts of climate change. Are they right to do so?

This question requires a 1,200 word essay to do it justice, but the short answer is yes. Of course, previous generations are responsible for many of the curses and blessings we face today and will face in the future. Some people and groups have contributed more than others. Some did not know they were doing harm. Others discovered the dangers from fossil fuel pollution a long time ago, but refused to change their ways. Instead they went out of the way to deceive the public in a relentless pursuit for more profits. At this moment in history, we are all tasked with changing the complicated world we inherited.

Given your awareness of climate change and its various impacts, what has that meant to you regarding personal lifestyle practices?

I am not in the business of making people feel guilty about their lifestyles, and I do not talk about the many ways I lowered my carbon footprint. For too long pollution has been a problem for consumers to solve. Environmentalists rightly point out that we each can live with less, but the majority of polluting takes place outside my home and is out of my direct control. The infrastructure that keeps everything going, the energy sector that provides energy, the farming practices, etc., these are very large systems that I cannot control. The truth is we are given so few affordable clean choices. From a moral standpoint we need to tread gently on this earth and not be wasteful. That is a lesson my mother taught me as a kid. But the real change needs to take place in the systems around us.

My biggest response is to speak out about pollution and how it has hacked our weather systems. I also engage in volunteer advocacy by meeting with members of congress asking to put a price on carbon and other fossil fuels. As a volunteer with Citizens Climate Lobby, I approach lawmakers with a solution that is effective and fair. I encourage my representatives to place a price on carbon and to give the revenue collected to households. This will jumpstart a transition to healthier sources of domestic energy production while also addressing the needs of citizens who will be affected by rising prices. There is a bi-partisan bill in congress, The Energy Innovation and Carbon Dividend Act, that I believe can make a huge difference.

Can you talk a little about your time spent trying to covert (from gay to straight)?

Why on earth did I spend 17 years and over $30,000 on three continents attempting to find a cure to being gay? This is a question that baffled me for a long time. I was desperate to de-gay myself and be more masculine. I lived in a world that punished LGBTQ people. It also rewarded straight, married people, especially masculine married men. I know my faith had a big part in it. As a Christian, I was told I could not be a believer and be gay. I had to choose. Over and over I chose Jesus. I was also affected by the negative public discussion about gay men. Back in the 1980s political and religious leaders spoke of “homosexuals” as a threat to national security and the moral fabric of the nation. We were the terrorists of the day – the enemy of the people and American families. I saw no positive portrayals of LGBTQ people in media, only twisted, ugly, scary images of us.

Then there was HIV/AIDS. I was a teen living outside of New York City as I read the first news reports about this strange new disease affecting gay men. They called it GRID, the Gay Related Immune Deficiency. Sometimes they referred to it as “Gay Cancer.” They renamed it HIV/AIDS. I felt terrified. I reasoned, “No one likes gays and I could even die from being gay!” Those are the factors that drew me in, but why did I stay in so long? That was the harder question to answer.

I believe it had to do with my desire to serve in a church that strictly controlled who could preach and teach. Even though I rejected being gay, the church leaders saw me as a flawed feminized man. I faced the same obstacles that blocked women from serving in the church. I call it “the stained glass ceiling.” As a white man in America, I panicked because I was not allowed to use my gifts and talent and calling. I believed if I could just be more masculine and seen as straight, the doors would open for me. I wanted access and the privilege to serve. That kept me looking for an elusive cure that ultimately caused great psychological and spiritual damage for me.

What’s your advice for CofC students who identify as LBGTQ+?

Actually, I hope students ask me for advice and insights about what we can do to address climate change. Not that LGBTQ+ students don’t need support. Of course they can learn from elders who have a history in the movement. I have found, though, that the key for an older gay man like me is to listen and learn. So many more people are open about being bisexual and gender non-binary. There is more visibility of transgender people these days. LGBTQ people of color have specific experiences and needs that I want to know.

Whenever I come to a place like the College, I always learn from faculty, staff, students and members of the wider community. If I ever do give advice from my experience as a gay man and my connections with other LGBTQ people, it is that I needed to learn to come out as my whole self. Coming out has to do with more than my sexuality, and it is a progressive act. I come out all the time as a person who is gay, Christian, geeky, artistic and curious about climate change. I have decided to come out on my own terms. I sometimes get pushback from some LGBTQ people about my faith. Many people don’t want to hear about climate change. But in a world where we can develop a false sense of worth based on the likes and retweets we get or do not get, I need to be true to who I am regardless if it is acceptable or interesting to other people.

Peterson Toscano will present his one-man show “Everything is Connected: An Evening of Stories, Most Weird, Many True” at 7 p.m. on Wednesday, Feb. 13 in the College’s Thaddeus Street Education Center, room 118. He’ll also speak on Tuesday, Feb. 12 at 4:30 p.m. with Corina Newsome in the Education Center, room 118. For more information about Toscano, visit his website.