New Research Looks at the Death of Megalodon

New research indicates that the extinction of the giant shark known as “Megalodon” may have occurred much earlier than first believed.

A new discovery by scientists indicates that the giant shark Otodus megalodon became extinct about 3.6 million years ago. That’s more than a million years earlier than researchers first projected the shark’s extinction.

According to College of Charleston paleontologist Robert Boessenecker, this new discovery disproves a very recent hypothesis that the shark perished alongside many marine mammal species as a result of a catastrophic bombardment of cosmic radiation from a nearby supernova.

Boessenecker and other researchers recently studied the fossil occurrence of the giant shark from the densely sampled rock record of California and Baja California in Mexico. 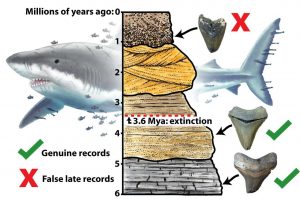 “We used the same worldwide dataset as earlier researchers, but thoroughly vetted every fossil occurrence and found that most of the dates had several problems – fossils with dates too young or imprecise, fossils that have been misidentified, or old dates that have since been refined by improvements in geology and we now know the specimens are much older,” says Boessenecker. “After making extensive adjustments to this worldwide sample and statistically re-analyzing the data, we found that the extinction of O. megalodon must have happened at least one million years earlier than previously determined. This is a substantial adjustment as it means that O. megalodon likely went extinct long before a suite of strange seals, walruses, sea cows, porpoises, dolphins and whales all disappeared sometime about 1 million to 2.5 million years ago.”

Boessenecker says extinction of O. megalodon was previously thought to be related to this marine mass extinction – but in reality, the two are not immediately related. He says it is also further unclear if this proposed mass extinction is actually an extinction, as marine mammal fossils between 1 and 2 million years old are extraordinarily rare – giving a 2 million year-long period of wiggle room. Rather, he concludes that it is possible that there was a period of faunal turnover (many species becoming extinct and many new species appearing) instead of a true immediate and catastrophic extinction caused by an astronomical cataclysm like a supernova.

Boessenecker believes competition with the newly evolved modern great white shark (Carcharodon carcharias) is a more likely candidate for the megalodon extinction. Great whites first showed up with serrated teeth about 6 million years ago and only in the Pacific Ocean; by 4 million years ago they were worldwide.

“Rapid changes are happening in our oceans owing to climate change, ocean acidification and plastic pollution. Better understanding of geologically recent extinctions of megapredators like O. megalodon clarifies the evolutionary pattern of marine fauna over the past few million years,” says Boessenecker. “If we hope to glean any information from the past in order to shed light on modern extinctions, that information will come from the past 5 million years of the marine fossil record.”

Feature photo: Megalodon jaws on display at the National Aquarium in Baltimore.