Last fall, the College of Charleston pep band, Chucktown Sound, did a reboot – debuting a new name, a new band director, new uniforms and new additions to its musical lineup.

All of these new features were on display at a recent men’s basketball game in TD Arena as the pep band performed a clever mashup of a classic marching band song and the current rap hit Mo Bamba. But upon closer inspection, another new feature of the band stands out. A woodwind instrument draws curious attention. It’s an accordion. And Chucktown Sound has not just one, but two accordion aficionados in its lineup this year. 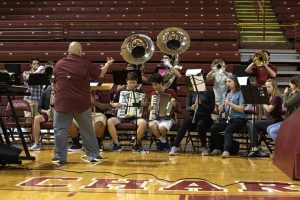 “My mother is Ukrainian and the accordion is a very popular instrument in the Ukraine,” says Wilhelm. “And I have a lot of Russian-Ukrainian friends who play back in New York.”

James Riggs, a senior biology major and Portuguese and Brazilian studies minor from Sumter, South Carolina, also embraces his heritage through the accordion. He says his family emigrated from Portugal, and the accordion is a popular instrument there.

“All the old songs my grandpa lets me listen to from his old records – almost all of them – have an accordion as the main instrument,” says Riggs.

Both Riggs and Wilhelm appreciate the portability of the accordion. In fact, Riggs first became interested in the accordion because he wanted an instrument he could bring along on camping trips with friends, specifically excursions with the Boy Scouts. A piano player, Riggs felt he was missing out on jam sessions when his friends began playing their guitars, ukuleles and flutes.

Now, Riggs and Wilhelm are putting their musical talents to use and having a blast at the same time. Wilhelm says his favorite experience with Chucktown Sound so far was traveling with the basketball team to the NCAA Basketball Tournament in San Diego last spring.

“That was a really fun experience to travel with the team,” says Wilhelm. “They took us on a private jet, we loaded up all of our instruments on the cargo hold underneath and flew out there and played for the game. It was super fun. It was a really memorable experience. They took good care of us.” 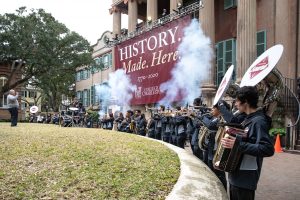 Aleksei Wilhelm and James Riggs book end the pep band at a performance for the unveiling of CofC’s 250th anniversary theme.

“It’s definitely a rarity having two very capable accordion players as members of Chucktown Sound,” says Gongora. “It always brings me back to my days at LSU and seeing the wonderful brass and zydeco bands of South Louisiana.”

In addition to the accordion, Riggs and Wilhelm share other interests and similarities. They first met in an entomology course at the College. After being partnered together for a lab assignment, they discovered they are both left-handed, both biology majors, and, of course, both accordion players. At the time, Wilhelm was in the pep band, but Riggs was not.

“I thought this kid must be punking me,” says Wilhelm, who immediately began recruiting Riggs to join Chucktown Sound.

Riggs soon joined the band and immediately felt at home with the other members.

“I’ve never played an instrument in a band before,” says Riggs. “It’s been a new experience and I’ve really enjoyed it. Everyone welcomed me in and even though it’s my first semester I feel like I could have and should have been a part of this a long time ago.”

Cougar fans can see Chucktown Sound in action at the final home game of the season for men’s basketball at 4 p.m. on March 2, 2019, in TD Arena.

Jane Stoudemire is a senior from Jacksonville, Florida, studying communication and media studies at the College of Charleston.