As part of Charleston Navy Week, which takes place March 11-16, 2019, numerous events are planned throughout the Charleston area, including two performances by the U.S. Fleet Forces Band at the College of Charleston. 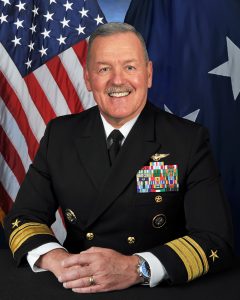 Two of the Navy Week events taking place at the College will feature musicians from the U.S. Fleet Forces Band. At 7 p.m. on Wednesday, March 13, the band’s Woodwind Quintet will perform in the Simons Center for the Arts Recital Hall, located at 54 St. Philip St. The quintet will perform with special guest artist, Charleston Mayor John Tecklenburg. Then at 4 p.m. on Thursday, March 14, the Navy’s brass band will perform in Cistern Yard. Both concerts are free and open to the public.

One of the local hosts for Navy Week is Navy Rear Adm. Daniel Fillion ’84, who earned a bachelor’s degree in business at the College of Charleston before embarking on a distinguished military career.

Navy Week activities will kick off at Patriot’s Point in Mount Pleasant on Monday, March 11, when Mayor John Tecklenburg will present a city proclamation to Fillion. Sailors from the newly commissioned USS Charleston will also be on hand.

Fillion is a native of Goose Creek, South Carolina. He has served as an aviator in multiple helicopter squadrons, as the navigator on the aircraft carrier USS Nimitz and as the commanding officer of the USS Wasp. He has received numerous accommodations for his service, including the Defense Superior Service Medal and on three occasions the Legion of Merit.

Fillion will be on campus on March 13 to meet with campus leadership and to deliver remarks as the featured speaker for the George G. Spaulding Distinguished Executive Speaker Series in the School of Business. The speaking event, which takes place at 2 p.m. in the Beatty Center’s Wells Fargo Auditorium, is intended for invited business students and guests, but limited additional seating will be available on a first-come, first-served basis.

In addition, Fillion will throw out the first pitch before the Cougar baseball team faces Charleston Southern University at CSU’s Neilson Field in North Charleston at 5:45 p.m. on March 13. The game will feature Navy themed events, including a performance by the U.S. Fleet Forces Band.

Other Navy-related activities at CofC include a presentation on Monday, March 11, by sailors from the Navy’s Meteorology and Oceanography Command (METOC) to students in the College’s meteorology program in the School of Sciences and Mathematics. The METOC sailors will also be at the South Carolina Aquarium on Saturday, March 16, from 10 a.m. to 3 p.m. and will be accompanied by a team of Navy divers.

For a complete list of Navy Week events throughout the Charleston area visit https://outreach.navy.mil/Navy-Weeks/Charleston-South-Carolina/.