By Amanda Kerr|2020-02-25T12:56:31-05:00March 12, 2019|Campus Life|Comments Off on Ellen DeGeneres Surprises High School Students with Scholarships to CofC
For privacy reasons YouTube needs your permission to be loaded.

They thought they were going to The Ellen Show on Monday, March 11, 2019, to talk about their goals of becoming teachers. But high school students Jaheim President and Darius Smith got a lot more out of the visit than just good conversation.

Smith told host Ellen DeGeneres that he found out earlier this year that he had been accepted to the College of Charleston. President said he was still waiting to find out if he would be joining the Cougar family. 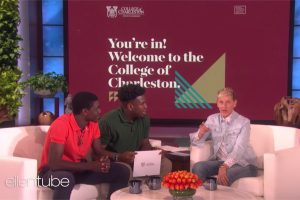 “I’ve been stressing out for the last five months, but I believe in positive energy, so College of Charleston, if you’re watching this, accept me now,” he said with a laugh.

It turns out, the TV host had the answer to President’s quest to become a Cougar.

“We may have told them to slow the process down,” DeGeneres said. “We may have said we would like to let him know, so the answer is here in this envelope. I think your mother’s going to be happy if this works out. And if not, we really picked a bad time to have you on.”

The show aired in Charleston on WCIV Channel 4 on Tuesday, March 12, at 4 p.m.

DeGeneres told President and Smith, who both attend Ashley Ridge High School in Summerville, South Carolina, some even better news: “The College of Charleston heard about you and Darius, and they want to cover your college tuition for all four years.”

“The College of Charleston is getting two fabulous young men,” said Ashley Ridge High School Principal Karen Radcliffe. She predicts that President and Smith will be great teachers. “I think they will be amazing. They have a heart for people and an enthusiasm for people. They are going to be those kinds of people who cheer for the underdog and want to do everything they can to ensure their students’ success.“

“My main inspiration to become a teacher was because for the kids I wanted to be what I didn’t see when I was growing up,” Smith told DeGeneres. “So, for me, my father was incarcerated when I was four years old, so not having that male presence growing up and like that’s really important because like the older I get, the more I understand things and having a father, even if it’s at school seven hours a day, that still helps. For the kids, that’s what I would do, that’s my goal. I want to be for them what I didn’t have.”

President added, “For me, I didn’t have my father growing up … my teachers have impacted me. I believe teaching is the greatest way I can give back to what they have done for me.”