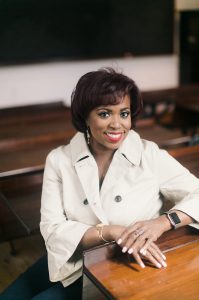 An accomplished scholar and executive in higher education, Lessane has served the College of Charleston community since 2010. In addition to her role at the Avery Research Center, an institution dedicated to preserving the legacy of the African diaspora with an emphasis on Charleston and the South Carolina Lowcountry, Lessane serves as associate dean for strategic planning and community engagement and as a tenured faculty member. Lessane’s appointment marked an important milestone in the history of the Marlene and Nathan Addlestone Library: She is the first African-American woman to serve as an associate dean for the library. Lessane also served as co-principal investigator for the Google-supported Race and Social Justice Initiative at the College, which published the first detailed report on the disparities in the lives of Charleston County’s black and white residents.

“The contributions she has made to the College and our community are immeasurable,” says John White, dean of the College Libraries. “I am grateful to have had the opportunity to have her as a colleague and I have no doubts that she will be wildly successful in her new position at Morgan State University.”

Lessane has worked at the Field Museum and the Museum of Science and Industry in Chicago. She serves on the board of the Collegium of African American Research, the Sophia Institute and the Charleston Library Society. She is a member of Alpha Kappa Alpha Sorority Inc. Lessane holds a bachelor’s degree from Fisk University, a master’s degree from Dartmouth College and a Ph.D. from the University of Illinois at Chicago. In 2016, she served as a Fulbright scholar at the University of Málaga.

“Dr. Lessane has brought such depth to the Avery Research Center, the College and Charleston,” says Karen Chandler, director of the College’s Arts Management Program and former leader of the Avery Research Center. “From the academic conferences she’s hosted at Avery [Research Center], the notable thought leaders she’s exposed us to through the forward-looking Race and Social Justice Initiative to the groundbreaking Racial Disparities Report in Charleston County she commissioned, she has not only expanded the Avery [Research Center’s] reach, but has also helped us understand better the collective memory and traditions of African people in the diaspora, and the cultural connections and negotiations among us.”

In 2018, Lessane was honored at the College’s Excel Awards as Administrator of the Year and was one of 11 women honored at the Charleston YWCA’s inaugural What Women Bring Awards for her work as a nonprofit leader.

“Dr. Lessane has changed the face of the Avery Research Center forever through her many initiatives, programming and general leadership,” said Tony Bell, chair of the Avery Institute for Afro-American History and Culture Board and an adjunct arts management faculty member. “She will leave the Avery [Research Center] in better shape than she found it, and our board meetings won’t be the same without her intellect and guidance. On behalf of the Avery Institute Board, we wish Dr. Lessane the best in her new endeavor.”