Panel Explores 65th Anniversary of Brown vs. Board of Education Ruling 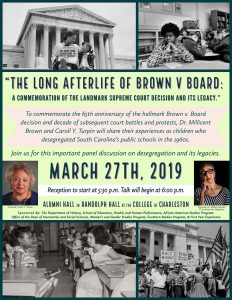 To commemorate the 65th anniversary of the hallmark Supreme Court decision Brown vs. Board of Education, Millicent Brown ’75 and Caroll Y. Turpin will share their experiences as children who desegregated South Carolina’s public schools in the 1960s during a forum at the College of Charleston on Wednesday, March 27, 2019. The event, which is free and open to the public, will be held in Alumni Hall within Randolph Hall.

The forum, “The Long Afterlife of Brown v Board: A Commemoration of the Landmark Supreme Court Decision and its Legacy,” will explore the history-making Supreme Court decision that ended segregation in American schools, the subsequent decade of court battles and protests, and the impact and legacies of desegregation.

This event is co-sponsored by the Department of History; the School of Education, Health, and Human Performance; Office of the Dean of Humanities and Social Sciences; African American Studies; Women’s and Gender Studies; Southern Studies; and First Year Experience. A reception starts at 5:30 p.m. The talk begins at 6 p.m.