Jerold L. “Jerry” Hale, dean of the School of Humanities and Social Sciences at the College of Charleston, has been named provost and senior vice chancellor for academic affairs for the University of Tennessee at Chattanooga, effective June 1, 2019. 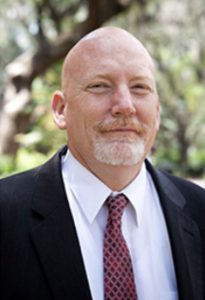 Hale has served as dean of the School of Humanities and Social Sciences (HSS) since 2013. Prior to his appointment at the College of Charleston in 2013, Hale had been dean of the College of Arts, Sciences and Letters at the University of Michigan-Dearborn since 2010. From 1991 until 2010, Hale was a faculty member of the Department of Speech Communication at the University of Georgia and was department head from 2000 to 2008.

Hale holds a bachelor’s degree in political science from the University of California, Los Angeles, and master’s and doctoral degrees in communication from Michigan State University.

At the College, Hale has implemented diversity, equity and inclusion training for his academic department chairs and their assistants that was adopted campus-wide. He also implemented another training program within HSS for department heads and search committee chairs to diversify applicant pools and avoid bias in evaluating credentials that was adopted campus-wide. In addition to providing leadership for traditional programs in the liberal arts and humanities at CofC, Hale has overseen interdisciplinary programs in environmental studies, child life, public administration, urban studies and women’s and gender studies.

Earlier in his career, Hale was an assistant professor of speech at the University of Hawaii-Mauna Loa from 1983 to 1984. From there, he moved to Miami University (Ohio) and served as assistant/associate professor of communication from 1984 to 1991.