By Alicia Lutz|2020-02-25T12:56:28-05:00April 2, 2019|Campus Life|Comments Off on CofC Course Prepares Students for Cooper River Bridge Run
For privacy reasons YouTube needs your permission to be loaded.
I Accept

Each and every one of the approximately 30,000 people participating in the Cooper River Bridge Run this year deserve a lot of credit. It takes commitment, training, strength and endurance. Still, only 21 of those runners will be getting College of Charleston credit for the accomplishment.

In fact, the students in the College of Charleston’s 10K Training course this semester will actually be earning two credits. This is the second spring that the Department of Health and Human Performance has offered the class, which is designed to train students specifically for the Cooper River Bridge Run, and it has proven to be very popular.

“It’s been growing through word of mouth,” says Michael Tornifolio, the class’ instructor and the College’s assistant women’s track and field coach, noting that the course started with 15 students in its first year. “My students keep telling their friends.”

Its popularity isn’t surprising. This is, after all, a popular race: People come to Charleston from near and far for the Cooper River Bridge Run, making it one of the top tourism events in South Carolina. And all those people run right past the College of Charleston.

“If you haven’t heard of this race before you come to the College of Charleston, you’ll find out about it soon enough,” says Tornifolio, adding that the event can be pretty enticing, whether you’re a runner or not. “It’s hard to not want to be a part of such an exciting thing that’s happening right in front of you.”

That’s one reason the course was first proposed. 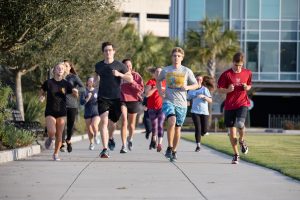 “It gets our students off of campus and out into the city, and really helps them connect to the greater Charleston community. And that connection to the community matters – not just for the four years they’re at the College, but for their lives after college, too,” says Tornifolio. “So, the class is an opportunity to be part of something really huge – and, at the same time, it improves their health and gets them moving.”

Whether they come into the course as couch potatoes or athletes – the students all start at the same place.

“This class is for everyone – we start slow and build from there,” says Tornifolio, explaining that, at the beginning of the course, there are timed runs to get each student’s benchmark. From there, the in-class workouts include some high-intensity surge circuits and/or group runs, with mileage increasing every four weeks. Outside of class, students are expected to get their mileage, as well, track and map all their workouts and turn in a log every Sunday. “It’s just something that keeps them accountable.”

That accountability is definitely something that has helped junior marketing major Legare Hay.

“I’m a pretty casual runner,” says Hay, who is the president of the College’s Running Club, but has never run a 10K before. “Being forced to run on a schedule was helpful because, even if my motivation was low, I had to continue.”

And that “homework” is what’s going to develop lasting habits.

“I took this course with aims to better my fitness level and to form a habit of working out,” says Tatjana Washington, a senior biology major who has run the Bridge Run three times in the past, but this year wants to beat her brother’s time. “I have improved my endurance and running time, and I am proud that I have made the habit of eating healthier and creating a workout plan outside of class.” 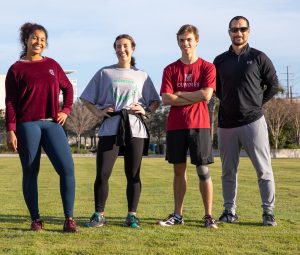 The class has also helped Washington achieve her goal of meeting new running buddies to work out with after the race.

“We each have a running buddy, and when we run around the peninsula, we often see other classmates,” she says. “It’s fun seeing them and having a mutual understanding of the struggle of the run.”

“We have all definitely gotten closer,” agrees Hay, joking “usually because we like to complain about being lazy.”

“We all are very open to talking to one another and sharing a quick joke about something that Coach Tornifolio may have said,” laughs Michelle Nannarone, a senior majoring in English who considers meeting new people the best part of the class. “I am always in the same classes with the same people, so it was nice to meet people of all majors and all years by taking this class.”

“It’s a fun, energetic group, and most of them never knew each other,” says Tornifolio. “But after running and training together, they find out they have more and more in common, and you start to see them develop this little community.”

Of course, the students won’t have to look hard to find a community of fellow runners on race day, April 6, 2019.

“This is all leading up to the Bridge Run,” says Tornifolio, who – as the big day approaches – has incorporated runs on the Arthur Ravenel Jr. Bridge and will be going over the logistics of the race with the students: parking, shuttles and so on. “They’ll be as prepared as possible for race day.”

On race day, all they have to do is run the Cooper River Bridge Run – that, and take a photo of themselves with their race bib at both the start and finish lines.

“I just want them to go out there and feel good about it,” says Tornifolio. “That’s what matters in the end.” 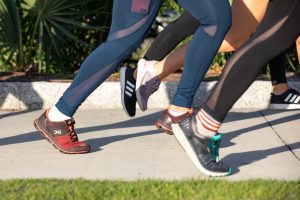 But the class doesn’t end at the finish line. While there are no more in-class workouts or required runs, the class will continue to meet, and each student will research and present about a famous 10K runner.

“Once they start to see real, physical progress and realize they can do something they couldn’t do before – that’s when it all starts to sink in,” says Tornifolio. “They’re realizing that they’re tougher than they thought. They’re realizing that, if they push and challenge themselves and don’t back down, they’ll come out better at the end of this. The rewards are amazing in the end.”

And not just for the students.

“It’s really satisfying for me to watch their confidence grow,” says Tornifolio. “Some of them come into this scared, but leave thinking, ‘I did this. I did it!’ I love watching that transformation. It’s a proud moment for me.”

Indeed: For that – Tornifolio himself deserves a lot of credit.