It doesn’t look like Jarrell Brantley will have a lot of free time this weekend. Brantley is taking part in two national basketball contests starting this Friday in Minneapolis. 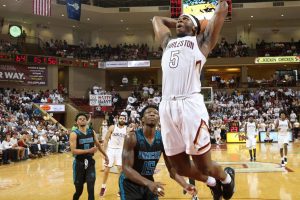 Brantley, a senior forward on the College of Charleston men’s basketball team, will be one of 20 outstanding senior players in NCAA Division 1 to play in the 2019 Reese’s College All-Star game held at U.S. Bank Stadium on April 5, 2019. He will be part of the East All-Stars that includes players from Georgetown, Nebraska, Cornell, Old Dominion and others. Brantley’s squad will be coached by former NBA standout Nate Robinson.

On that same day, Brantley will also compete in a three-on-three basketball tournament that is comprised of all-star teams of seniors representing all 32 Division I conferences. Brantley will join forces with fellow Colonial Athletic Association players Vasa Pusica of Northeastern, Devontae Cacok of UNCW and Hofstra’s Justin Wright-Foreman to complete in the Dos Equis 3X3U National Championship. In this tournament, teams will compete for a $150,000 prize pool, with the champions taking home $100,000. Additionally, the winners will earn the right to compete in the 2019 USA Basketball 3×3 Open National Championship later this spring.