Think you’ve got a tough job? How would you like to have to measure the weight of all the trees on the planet? That’s what Barry Coyle ‘86 is doing as a NASA physicist at the Goddard Space Flight Center in Greenbelt, Maryland.

But he’s doing it with brains not brawn. 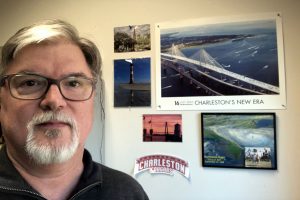 Barry Coyle displays his pride for CofC and the Holy City in his NASA office. (Photos provided)

Over the last 20 years, Coyle has built the laser systems for an aircraft-based laser altimeter developed by his NASA colleague (and good friend) Brian Blair, along with a University of Maryland geographical scientist, Ralph Dubayah. After several starts and stops, proposals, aircraft campaigns and instrument evolutions, the Global Ecosystem Dynamics Investigation, or GEDI, was launched in early December and is now scanning the forests of the world from the International Space Station (ISS).

Why would anyone want to do that? For a number of reasons, but primarily to calculate the carbon load of the planet’s vegetation.

“It’s the last big data point in the global climate model and will significantly help quantify the global effects of climate change,” says Coyle, who majored in physics at the College. “We know winds, sea temperature, ground coverage, clouds and everything else that’s in the mix, but we don’t know carbon volume and density as well as we need to. That’s why this is a unique measurement: we’re going to literally weigh the trees.”

Carbon makes up about half of vegetation biomass, so the $100 million mission to quantify it will allow NASA scientists – and scientists around the world – to calculate the carbon sequestration potential of forests under future climate and land use situations.

The GEDI laser works like a radar but instead of radio waves, it uses pulses from an infrared laser, dangerous up close, but harmless from orbit. The four beams leave the ISS 254 miles above earth at a diameter of about an inch-and-a-half, but produce a 600-meter footprint (about 200 feet). GEDI is expected to produce about 10 billion cloud-free observations during its two-year mission. (The name GEDI is an homage to Star Wars since JEDI fighters use laser swords.)

“It’s like a push broom that will go on continuously for two years because trees are always changing,” says Coyle, who often hires CofC students for the summer. “We turned on GEDI and finished full commissioning exercises in February. The science team has taken over now, and they say it’s like drinking from a fire hose with the 3.5 million laser shots an hour. It’s a lot of data.” 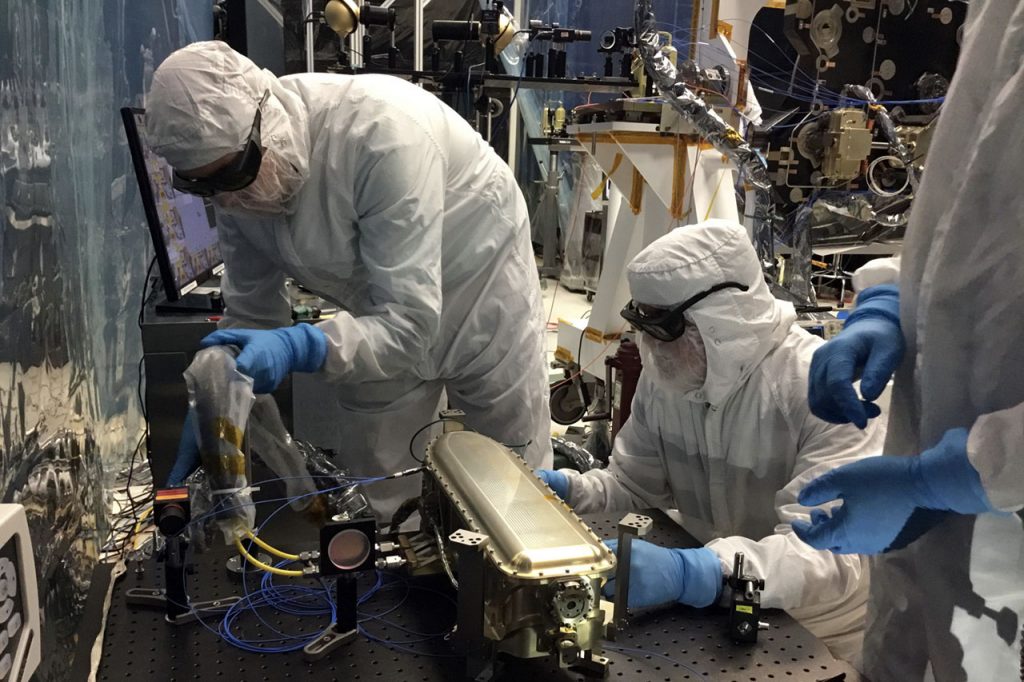 Barry Coyle works with NASA colleagues on construction of the GEDI laser.

Coyle can trace his interest in lasers back to when he first started working with with them in the 1980s while in physics professor Fred Watts’ laser lab at CofC. It was a seminal moment that set him on a life-changing trajectory.

“I have Dr. [Bob] Dukes and Dr. Watts to thank as two of the most influential professors in my life, as was the whole physics department in the mid-80s” he says. “The day in early December when GEDI launched into space was easily the proudest day of my career to date, and it made me super proud to be a CofC physics alumnus.”

And the fruits of his labor now pouring in from the heavens look a lot like an echo cardiogram as the “lidar” systematically and consistently samples the vertical structure of the world’s forests – a first in and of itself since no one has ever measured how tall trees are globally.

“All the trees and vegetation breathe in the CO2 and make oxygen,” says Coyle. “As we’re pumping more and more carbon out of the ground, we need to know how much we can absorb per year. Are we past the tipping point? How bad is it? That’s where this can help.”

Coyle says the effort, and the data it will produce, is the result of unparalleled teamwork.

“Ultimately, I may have designed and evolved the laser design, but I had a team of unmatched engineers and technicians – all great friends – that made it all possible to build these to flight quality units ready for the ISS,” he says. “This is what working at NASA is all about.”

Featured image: Barry Coyle works on the GEDI laser ahead of its launch in December to the International Space Station.