Rebekah Edmondson’s story as an American soldier did not begin with a patriotic call to service as is often depicted in movies; it began out of desperation.

Edmondson, a sociology major at the College of Charleston, grew up in St. Louis, Missouri, before dropping out of high school and heading west. Over the next several years she would live in eight different states. She survived by finding work as a traveling tattoo artist. By age 19, she was serving drinks in a Las Vegas nightclub. She was, for the most part, on her own, and she knew she couldn’t live that way forever.

So, in her desperation, she joined the Army National Guard.

The woman you see on campus now looks nothing like that lost 19-year-old. She looks like a warrior. Tattoos crawl out of every edge of her shirt. Her speech is intelligent and professional, but also frequently spiced with “F” bombs. Watching her work with others, it’s easy to see that she is a natural leader. The funny thing is, she doesn’t seem to realize it. Edmondson will stop herself mid-sentence and apologize that she is talking too much, while those around her are waiting for more direction, hanging on her every word.

Edmondson found an inspiration in the Army that helped develop her into the person she is today. It came from her female commanding officer, who saw the potential lying dormant within her.

“She taught me the ethos of being all you can be,” Edmondson says.

While stationed in Maryland, Edmondson enrolled in a competition against other service members in a battle of who’s the toughest among the military branches. Edmondson won, earning her a spot at the Army Airborne School at Fort Benning, Georgia. After that, she joined an Army boxing team and after winning her first competition she was rewarded with a slot to attend Army Air-Assault School, where she was trained to rappel from helicopters. Later, she would become a master fitness trainer working for the National Guard Bureau and the Pentagon.

In 2010, as the U.S. military was evaluating the feasibility of placing women in combat, Edmondson was selected as one of 22 applicants (out of 72) to report to Fort Bragg, North Carolina, for combat training exercises. She felt tremendous pressure to prove herself as a woman.

“All women are counting on me to prove we can hang,” she recalls thinking. 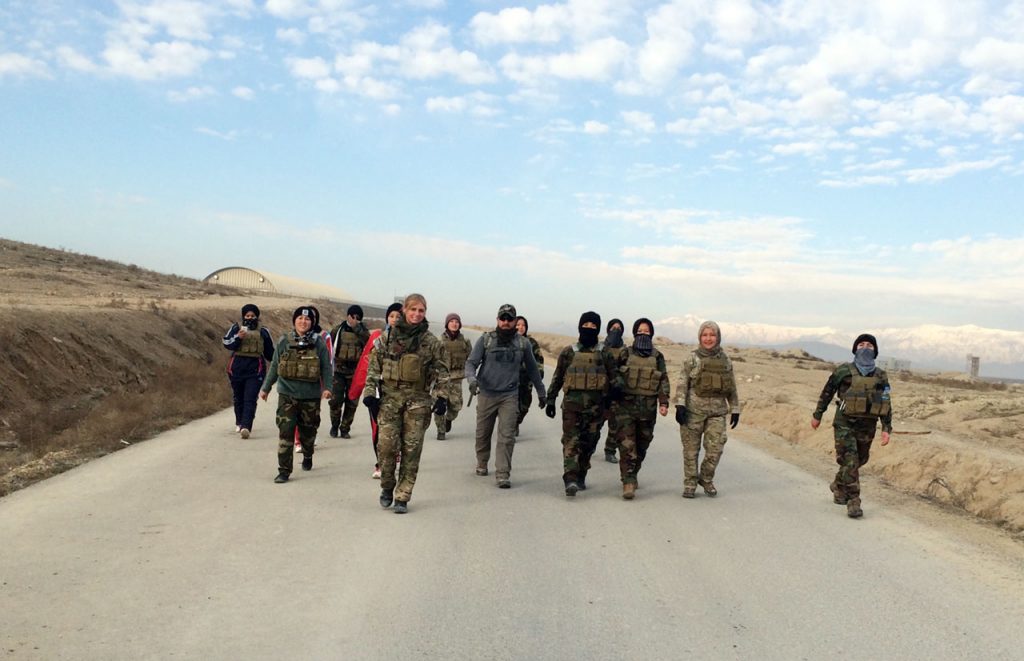 Rebekah Edmondson working with Afghan women while on deployment in Afghanistan. (Photo provided)

In 2011, she deployed to Afghanistan for the first time as one of only two women among a 160-man Army Ranger company. The company was working with an Afghan special forces unit that was trained and funded by the United States. Because of the cultural dynamics and rigidly defined gender roles in Afghanistan, it was believed that the incorporation of women could add tactical advantages to combat units. Afghan women are often prohibited from speaking to men outside of their families, which makes it difficult for the military to gather information from civilian women in Afghanistan. An integrated unit would be better able to collect information from women living behind enemy lines, thereby increasing the unit’s overall capabilities and its ability to safely complete the mission. But the unit needed someone to train the Afghan women. Edmondson was chosen for the job.

To achieve this, she led a unit of about 30 women through a U.S. Army-style boot camp. She taught them fitness and how to shoot an M4 assault rifle. The women climbed mountains in full body armor to ensure they could keep up with their male counterparts. They were taught in the classroom how to collect intelligence.

When the unit became operational, Edmondson would accompany the women on two to three missions a night. She continued to work with them for three and a half years over the course of four separate deployments.

“It’s very against the grain of their culture. One, a woman having a job, period; and two, them being away from their families for an extended period of time,” she explains. “In the U.S., we deploy, then we are given a period to rest and recover before we go back to our jobs. Because of mission demands this isn’t feasible for them.”

Edmondson saw how hard the women worked in defense of their homeland. She wanted to expand the opportunities for military training for the women in the unit. So, she began inquiring with her connections in the military, which had programs for men to receive training outside Afghanistan, but due to the culture, not the women.

“Just because of the cultural dynamics, they weren’t looking at granting an Afghan woman permission to leave their country to go to America to take a military course, but they were allowing the guys to do that, and so I fought through a lot of different bureaucracy. If you are employing these women in the same way and in the same unit as you employ these men, you have got to be able to give them equal access,” she says.

After her second deployment at the end of 2013, Edmondson had an epiphany: she had successfully trained these Afghan women to become soldiers, but she had failed to recognize the cultural challenges that were holding them back. More so, she realized what these women were really thirsting for was an education. The women worked hard in their training because they were grateful to be learning anything, even if it was how to shoot a rifle.

“I didn’t realize the value of education beyond what I was doing militarily,” she says. 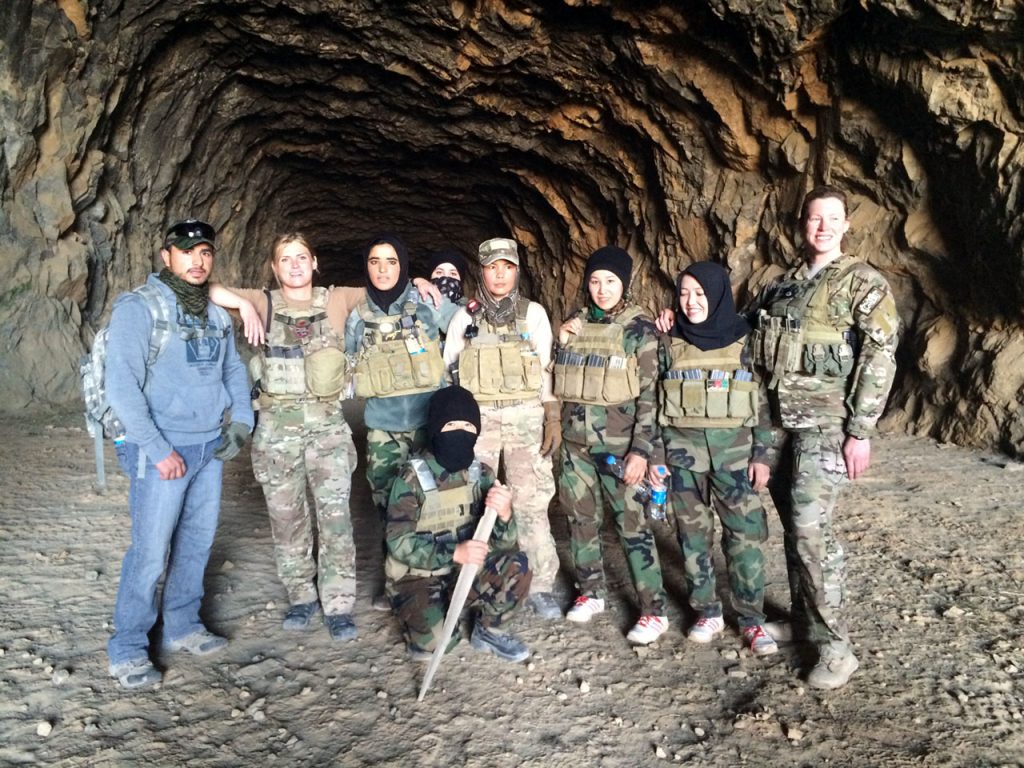 When Edmondson returned to Afghanistan for her third deployment in 2015 she had a new mindset. She challenged herself to figure out how to address these women’s needs. She started by addressing the culture of sexual harassment and sexual assault that was a part of everyday life for women in the Afghan military. She spent many nights consoling crying victims who were afraid they might be pregnant – a possible death sentence in Afghanistan.

“If they have a baby out of wedlock, even if they were raped, their head is on a chopping block because it is considered shameful,” she says. “Honor killings are a real thing. Most Americans will never understand those types of injustices.”

This inspired what Edmondson now views as her greatest achievement in Afghanistan: She created a sexual assault awareness seminar for men in the Afghan special forces. She succeeded in getting the Afghan military leadership to attend and acknowledge how sexual assault can debilitate the effectiveness of a co-ed military unit.

“Sexual assault inhibits these women from operating in the full capacity that is demanded of them,” she says.

But while this third deployment marked a breakthrough in her work with the women, it also marked the moment when the violence of war would change her life. Edmondson was out on a mission when a woman detonated a bomb vest. She was in the blast radius and was knocked unconscious. She sustained a severe concussion and chronic injuries.

She didn’t know it at the time, but when she returned to Afghanistan for her fourth and final deployment in 2016 there were still lingering effects from her combat injuries. She had gained considerable experience from her previous deployments and remained driven to provide the women she trained with educational opportunities. Unfortunately, she was no longer combat-ready herself.

“I started realizing during that last deployment that my health was really declining, especially from a mental health aspect,” she says.

At the end of the deployment, she decided to hang it up. In 2016, she was honorably discharged and relocated to Charleston to begin her studies at the College of Charleston. 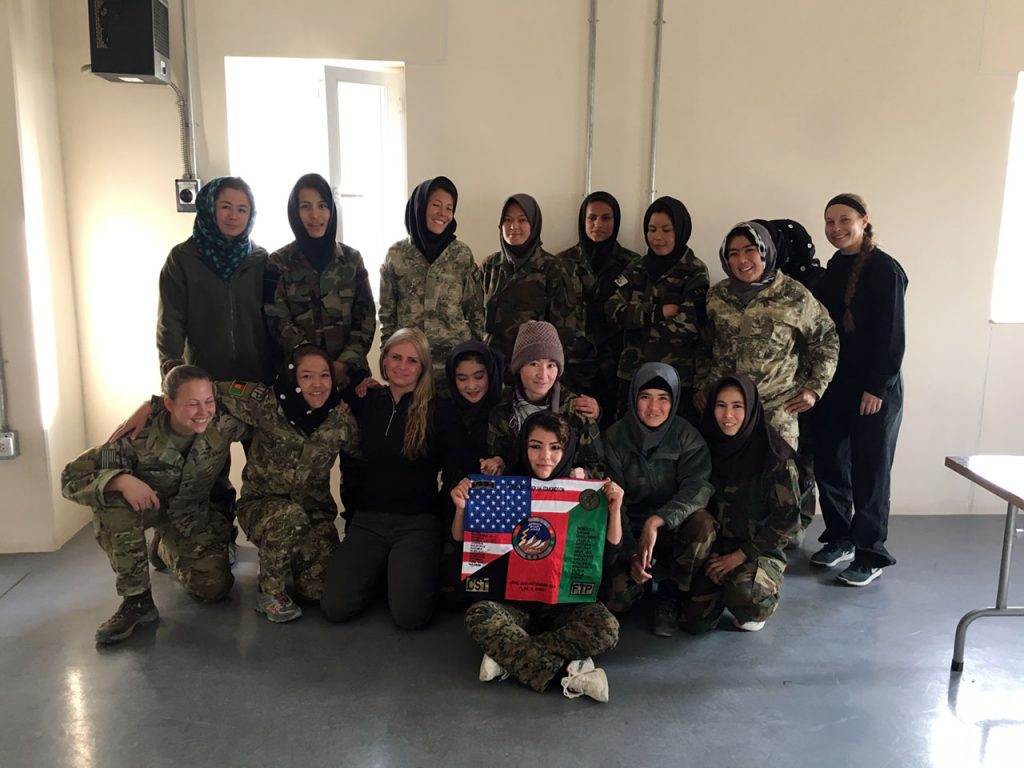 “I wanted to start over someplace new, and since I had been basically living out of a storage unit at Fort Bragg for half a decade, I wanted to find a place to call home,” she says.

Edmondson struggled with readjusting to life as a civilian. She felt she had lost her purpose. She, like many other veterans who have returned home from combat, found solace in a bottle. The combination of her drinking and her combat injuries made her angry and irrational, and her temper was quick, she says.

Edmondson’s temper exacerbated the challenge of fitting into a college campus. Sitting in a classroom was difficult for her. She often positioned herself by the door so she could leave before saying something she might later regret. It wasn’t the school work or late nights studying that were the challenge. She was used to working hard on little or no sleep. But there were still missing pieces that were holding her back. She needed support.

By 2017, her drinking was out of control, and she was arrested for drunk and disorderly conduct. She was at rock bottom. But the arrest provided the push she needed to seek help. Edmondson says she sought out available campus resources in an effort to turn her studies – and her life – around. 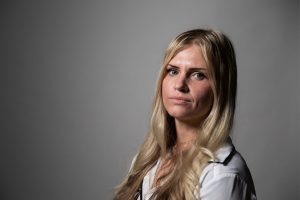 At about this time, Edmondson also found another kind of support in an environmental sociology class. She befriended fellow CofC student and U.S. Navy veteran Kyle McKibben. The pair bonded over past military experiences. They realized they had been deployed at the same time to Bagram Airfield in Northeastern Afghanistan, the largest military base in the country. With McKibben, she says, it felt good to have a friend who understood what it was like in that devastating environment.

“Nothing in our lives is ever going to replicate our experience in the military, so why not keep that alive?” she says. “Because it (expletive) feels good.”

Edmondson had found the support on campus she had desperately needed, and her friendship with McKibben showed her the benefits of connecting with other veterans. This inspired them to create a non-profit called Still Serving, which helps connect veterans transitioning to civilian life with leadership opportunities within their communities. For their efforts Edmondson and McKibben are being honored with the Impact-Innovators Award by the Atlantic Institute for Peace. The ceremony will take place on April 25, 2019, at The Citadel.

Meanwhile, Edmondson says she still has more work to do back in Afghanistan. She feels that she has not yet fulfilled the promise she made to the Afghan women she served with. She had been all set to return to Afghanistan this spring, this time as a civilian contractor, when she encountered a setback. Due to recent troop drawdowns the program training Afghan women is coming to an end. But she’s not giving up and is determined to find new ways to provide educational opportunities to the Afghan women she trained. It remains her passion.

“What these women need to know is that there are individuals out there who acknowledge what they have accomplished,” Edmondson says. “These women are pioneering the way towards opportunity for all women in Afghanistan. They are a symbol of hope for what’s possible when you invest in people, and I can’t give up on them simply because my military career has come to an end.”