The College of Charleston’s Race and Social Justice Initiative (RSJI) is pleased to announce the receipt of a major gift that will fundamentally transform the initiative’s impact in Charleston and beyond. 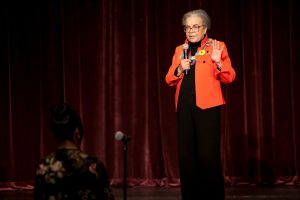 Activist and founder of the Children’s Defense Fund Marian Wright Edelman spoke at the College in 2016 as part of the Race and Social Justice Initiative.

The generous donor – who has elected to remain anonymous – has gifted $150,000 as part of a multi-year commitment. This new support affords RSJI an opportunity to chart an ambitious future for itself as a facilitator of public events, exhibitions and various projects to promote awareness of the history and ongoing struggles of racial injustice in Charleston, the state of South Carolina and across the United States.

Founded in 2015, RSJI established itself as an integral community partner and advocate, and launched its own Student Leadership Award and scholars-in-residence programs; cofounded the Social Justice Collaborative in Higher Education; and commissioned the first detailed report on the disparities in the lives of Charleston County’s black and white residents.

The gift’s enormity, however, will not only allow RSJI to bolster these current programs and resources – the anonymous donor’s support will be used to expand and deepen the initiative’s impact.

“We are immensely grateful for this contribution,” said John White, co-principal of RSJI and dean of the Libraries. “Philanthropic support for the RSJI project allows us to continue to document the devastating impact of racial and economic inequality on the region and to shine a light on institutional racism and its legacies in our communities. RSJI is committed to the promotion of equity, justice, and inclusion. On behalf of the College and the RSJI team, I want to convey my deepest gratitude to our anonymous benefactor.” 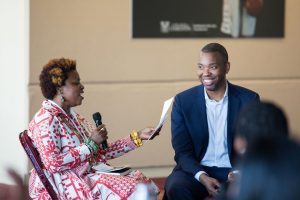 Patricia Williams Lessane with writer Ta-Nehisi Coates for an RSJI funded event in 2017.

For Patricia Williams Lessane, RSJI’s co-principal, the gift could not have arrived at a more opportune time: her final month serving as the executive director of the Avery Research Center for African American History and Culture and the Libraries’ associate dean of community engagement. She is more confident than ever in RSJI’s future. Williams Lessane was appointed recently as the associate vice president of academic affairs at Morgan State University in Baltimore, Maryland.

“I am so thrilled about this generous gift,” Williams said. “It speaks not only to the important work that RSJI is doing but it also reflects the goodwill of philanthropists who want to use their resources to make Charleston a fair, equitable, and inclusive place for all of its citizens. I couldn’t be happier for my colleagues who will continue to carry out the RSJI mission.”

The Race and Social Justice Initiative (RSJI) at the College of Charleston was founded in late June 2015 following a major grant from Google in response to tragic events in Charleston, including the shooting death of Walter Scott by a police officer and the mass shooting at the Emanuel AME Church. The mission of RSJI is to promote public awareness and dialogue about race and social justice issues in the Charleston area, the state of South Carolina and beyond, through a collaborative effort led by the Avery Research Center for African American History and Culture, Addlestone Library, the African American Studies Program, the Lowcountry Digital History Initiative and multiple community partners.

About the Author: Vincent Fraley