Robert Ivey Scholarship in Dance is a Moving Legacy

Most anyone in South Carolina with the slightest interest in dance would recognize the name Robert Ivey. After all, for decades, the late local legend attached to that name was a beloved dancer, choreographer, instructor and College of Charleston professor. In each of those roles, he lifted others up, often in every sense of the word. In doing so, Ivey was able to share with them the moving power of dance.

In 2017, the College of Charleston’s Robert Ivey Scholarship in Dance became fully endowed thanks to a reinvigorated effort by friends and family. Among those leading the philanthropic charge were Matthew Kennedy ’01, a former student of Ivey while on a dance scholarship at the College, and adjunct professor Eliza Ingle, a close colleague of Ivey. 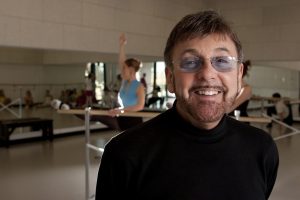 Robert Ivey in his studio.

Because of these efforts, which doubled the fund, the scholarship is primed to ensure that others are able to follow in Ivey’s path and similarly uplift others.

“He was one of the first people to teach dance at the College,” says Todd McNerney, associate dean of the School of the Arts, who attributes Ivey as being instrumental in starting the dance program at the College.

Ivey began teaching at the College in the early 1980s and became a full-time professor in 1993. He taught dance technique in ballet and modern 20th-century dance, introduction to theater, history of dance, choreography, dance ensemble and the popular Maymester course on the Spoleto Festival.

After Ivey retired from his position as associate professor in 2011, the Department of Theatre and Dance created the Robert Ivey Scholarship in Dance to honor him and his numerous contributions to the College. Ivey, who according to McNerney was never one to seek such recognition, at first demurred.

“I had to verbally convince him that we wanted to host an event for him and wanted to start a scholarship fund,” says McNerney. “And it was very good that we did, because shortly thereafter he got sick.”

The College was pleased to welcome its first Ivey scholar in the 2018–19 school year. Recipient Bethany Rupert is a senior at the College double majoring in psychology and dance with a concentration in performance and choreography. A native of Charleston and longtime local dancer, Rupert furthers her ballet and modern dance training at CofC and the Robert Ivey Ballet Academy, where she currently teaches. After graduation, she plans to continue teaching dance to students of all ages and become a dance therapist for people with disabilities.

“I am honored to be the inaugural Robert Ivey Scholar,” says Rupert, who is appreciative of the support that has allowed her to worry less about finances while pursuing her studies. “I am grateful that I get to share dance with the next generation of dancers, just like Robert Ivey so passionately did.”

Gretchen McLaine, associate professor and director of the dance program, says Rupert’s passion and dedication to dance made her an obvious choice as the scholarship’s first recipient.

“Bethany embodies all of Bob’s most wonderful qualities,” says McLaine. “She is generous, dedicated and humble.”

Before moving to Charleston in the 1970s, Ivey was already well established in the dance world. He studied ballet at the American Ballet Theatre School while attending Columbia University in New York as a pre-med student, earning a degree in radiology before turning to dance full time. He would later study at the Ballet Arts School in Carnegie Hall. His professional credits include major roles on Broadway and in Europe, most notably the New York and London productions of West Side Story. He was a member of the Swedish State Theatre and Royal Norwegian Ballet for seven years and studied dance in Russia. Ivey originally came to Charleston as a dancer to perform in an opera during Spoleto Festival USA, before making Charleston his home.

Ivey, who died in 2011, remains a prominent figure in Charleston’s cultural community by way of his significant and storied legacy. The school that bears his name, the Robert Ivey Ballet Academy, over which he presided for 35 years, continues to cultivate both the technique and the artistic development of those drawn to classical ballet. It also offers productions that impart the beauty of ballet throughout South Carolina and well beyond, having toured all over the U.S., as well as in Russia, Denmark, South America, Spain and China.

Tagged with: department of theatre and dance • homepage-feed • philanthropy • school of the arts • today-featured