In the financial world, a derivative is an advanced investment choice based on or “derived” from an underlying financial asset like currencies or commodities – basically something that trades off the price of something else.

The world of derivatives was just taking off when Scott Ward graduated from the College in 1985 with a mathematics degree. He moved to New York City to take a job with Citibank and helped to create securities, or stocks, out of credit-card receivables. Within a few years, he had jumped to Merrill Lynch to manage interest-rate derivatives pegged to the dollar and foreign currencies, eventually rising to director and living abroad for eight years in London, Hong Kong, Tokyo and Toronto. 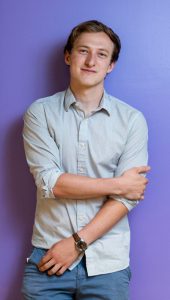 John Cobb, a double major in mathematics and chemistry, is the first recipient of the Scott Ward Award for Excellence in Mathematical Studies. (Photo by Mike Ledford)

“Right place, right time,” says Ward, adding that his CofC degree came in really handy because derivates are all based on math. “The products were just being invented, and I just happened to be along for the ride, which was really fun. I was able to work really hard and was compensated nicely because you give a piece of yourself when you work in that world.”

The money centers of the world where Ward worked were a long way from rural Westminster, South Carolina, near Clemson, where he grew up. For college, Ward wanted a little more of an urban setting, and few choices, especially in South Carolina, offered a better option for that than CofC where he acted in plays, worked in student government and joined a fraternity.

“The College allowed me to grow and form as a young adult,” he says. “It allows you to make choices about what you are to become and how you view the world. I really got to sample the best of the world in many different ways. It helped me in a multitude of ways, and there’s no better place than Charleston.”

After retiring from the financial world in 2004, Ward returned to the Upstate and got involved in another kind of derivative: deriving good works from his wealth by restoring historic homes, volunteering and giving back to the College with the creation of The Scott Ward Award for Excellence in Mathematical Studies Endowment in 2007.

“I wanted to do something a little more tangible,” he says, adding that he’s particularly excited about the scholarship. “I hope it encourages others to build their own endowment at the College. It’s a unique opportunity for people who want to give back because you can stage it in. Helping hands and encouragement are always needed to help people move forward and find their path.”

His endowment has now matured to where it can start paying scholarship dividends, and the first recipient, John Cobb, certainly appreciates that helping hand. A double major in mathematics and chemistry, the Honors College senior was recently awarded the National Defense Science and Engineering Graduate Fellowship and plans to pursue graduate studies in math at the University of Wisconsin Madison in the fall. Cobb was previously named a Goldwater Scholar in 2017.

“I was grateful to learn that the mathematics professors that I have so much respect for at CofC would think of me for such an award,” he says. “It is really encouraging. In addition to easing financial strain so that I could spend more time learning, recognitions such as the Scott Ward award strengthened my applications to graduate school.”

Ward had the pleasure of meeting Cobb at a recent donor event and was blown away by his mathematical skills.

“You can just tell he’s going to do great things,” says Ward. “The world of math is his oyster. He is a rocket scientist. I’m not in his league, but I’m very happy to promote his efforts. Helping and encouraging someone to feel good about what they’re trying to achieve in life at an early age is always a good thing.”

The best derivative of all is the feeling you get from helping others.