CNN Producer Tells Class of 2019 ‘You Have What It Takes’

Life after college can seem daunting. How do you begin to put all that hard earned knowledge to use and make your dreams a reality? Start small and have faith.

For alumna Sonya Renee Houston ’86, a producer for CNN, her career began as an English major at CofC and editor of the student-run newspaper The Meteor. That led to an internship at a local television station, which led to a job at a TV news station, which eventually led her to become an Emmy-award winning producer for CNN. Currently, Houston is a senior producer for CNN NewsRoom based at the network’s headquarters in Atlanta, Georgia. 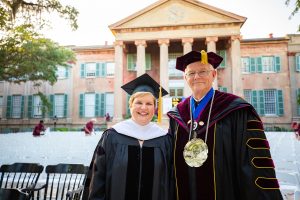 But Houston on Friday, May 10, 2019, told the nearly 600 graduates from the School of Humanities and Social Sciences, the School of Professional Studies and the Graduate School of the University of Charleston, South Carolina that when she walked across the Cistern to receive her diploma 33 years ago, she didn’t have it all planned out.

“How did I get from this Cistern with my big shoulder pads and even bigger hair to leading breaking news coverage on CNN? I did something simple,” she said. “I took steps in a positive direction, even though I didn’t know exactly where I was headed. Martin Luther King Jr. gave this advice: ‘Take the first step in faith. You don’t have to see the whole staircase, just take the first step.'”

Friday’s commencement ceremony is the first of three held by the College this weekend. Two additional ceremonies for graduates from the College’s other academic schools will take place on Saturday, May 11, at 10 a.m. and 4 p.m. in Cistern Yard.

Houston’s first small steps as a student-reporter would eventually lead to big things in her career. She began her professional career at WCSC-TV in Charleston, before taking a post as a producer at WYFF-TV in Greenville, South Carolina, and later joining CNN. In 2011, she was honored with an Emmy Award from the National Academy of Television Arts and Sciences for CNN’s coverage of “Revolution in Egypt: President Mubarak Steps Down.” She has also been recognized for her contribution to CNN’s Emmy Award for coverage of the Sept. 11 terror attacks and multiple Peabody Awards for coverage of U.S. presidential elections, Hurricane Katrina, the Gulf of Mexico oil spill and the Arab Spring. 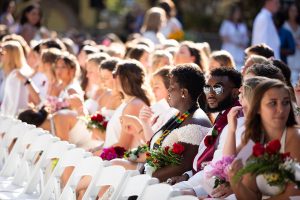 On Friday the College presented Houston with an honorary degree of Doctor of Humane Letters for her groundbreaking work in broadcast journalism.

Under the hazy, late afternoon sun family and friends cheered and applauded as members of the Class of 2019 took to the stage under the moss draped oaks in Cistern Yard. For many students, it’s the culmination of years spent working to build a foundation from which to launch their careers.

Madeleine Ware ’16 said the day marked the end of more than six years spent at the College, first earning undergraduate degrees in history and biology, before earning her master’s in history on Friday.

“It feels pretty surreal because this is a place that I’ve been for six plus years now,” she said. “It feels like a big step to finally finish my degrees in Charleston. It’s just been an amazing place.”

Ware has big plans for the future – she’s heading to Connecticut where she’ll attend Yale University to earn her doctorate in the history of medicine and science, an interest she cultivated during her graduate school years at CofC where she researched women’s health histories in the Lowcountry.

“I hope to continue researching reproductive health histories and connecting women’s stories from the past to present day issues,” she said. 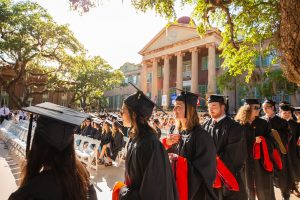 Psychology major Anthony Dein said he’s thinking of putting his studies to use by pursuing a law degree.

“I’ve done a lot of studying of interpersonal relationships or cognitive psychology, so how people think,” he said. “I think knowing how people think will definitely help with a law degree and working with people.”

As a native of New Jersey, Dein said he’s also enjoyed the Southern ambiance of the College.

“The people are friendly, the weather is better, I like it,” he said with a laugh.

But what he’ll miss most about the College is the relationships he’s built here, particularly the friends he made playing for the school’s club tennis team.

“I’ll miss the friends I made playing tennis,” Dein said. “That’s how I met most of my friends. It was a lot of fun.”

Presiding over spring commencement, Interim President Stephen C. Osborne ’73 said the end of the academic year brings to a close the College’s Year of Women, a celebration marking the centennial anniversary of women being admitted to the College, noting that “it is only fitting that our three commencement ceremonies have incredible and accomplished women alumnae delivering our commencement addresses.” 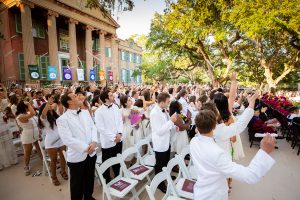 In addition to Houston, Jody Gottlieb ’89, chief creative officer and executive producer for the Seattle-based Rainstream Media, will give the commencement address on Saturday morning, while Ebony Jade Hilton-Buchholz ’04, associate professor of anesthesiology at the University of Virginia, will serve as commencement speaker for the Saturday afternoon ceremony.

Osborne encouraged the College’s newest alumni to be confident in their ability for whatever comes next.

“The solutions to countless problems are just waiting for your attention, your creativity, your perspective, your passion,” he said. “You are ready for the world. And let me tell you, on behalf of the world, we are ready for you. Go dare greatly!”

Houston shared similar words of wisdom: “While you may not know exactly in this moment what you’ll do in life or where your career will take you, I promise you, you have what it takes to meet the challenges life will bring your way.”