And the graduates at the final ceremony of the College of Charleston’s Spring Commencement on May 11, 2019, seemed to do just that.

Commencement speaker and CofC alumna Ebony Jade Hilton-Buchholz ’04, associate professor of anesthesiology at the University of Virginia, addressed more than 700 graduates from the School of Education, Health, and Human Performance; the School of Languages, Cultures, and World Affairs; and the School of Sciences and Mathematics. 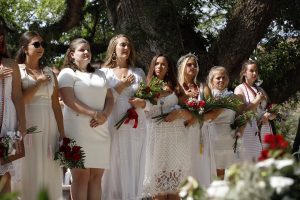 During the ceremony, Hilton-Buchholz was awarded a Doctor of Humane Letters degree in recognition of her dedication to the medical profession and her work to address racial disparities in access to healthcare. In addition to her position at the University of Virginia, she is also co-founder of GoodStock Consulting, a healthcare consulting group, a children’s book author, a public speaker and community activist.

Hilton-Buchholz told the graduates that while she is proud of her many professional accomplishments, the greatest lesson she’s learned came from a patient battling a series of infections brought on by pancreatitis.

“This lady, I consider her my earth angel,” said Hilton-Buchholz. “She was my ICU patient for eight months. For the last weeks of her life we literally had to resort to opening her abdomen. On a daily [basis], we would wash out her body and pack it with dressings and all this plastic lining to try to keep the infection away from her.” 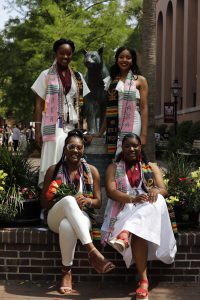 The patient, an older woman, knew the end of her life was near. All Hilton-Buchholz could do was sit with the woman, hold her hand and talk with her. One day, she asked the woman what she would do if she could do just one thing.

“She turned her head and she looked out the window, and I just dropped my head and looked at the ground. And for a moment we were just silent. But when she finally spoke, she turned to me and she said, ‘You know, If I had one wish, it would be to just feel the rain again.’”

Hilton-Buchholz said she managed to hold it together in that emotional moment, but on her way home later, she completely broke down, tears streaming down her face as she thought about what the patient had said.

“When I was eight years old I decided I wanted to be a doctor, so I was running on this hamster wheel of getting to these achievements,” said Hilton-Buchholz. “But honestly, in getting to that point I missed out on what the beauty of what life is – and the greatness of what comes with feeling the wetness of rain.”

Slow down and appreciate the journey of life, she told the graduates, and take time to appreciate little moments.

“Every day God will give you this beautiful tapestry that was only meant for you to see in that moment from your viewpoint,” she said. “So that sunset, it looks incredible. But it wasn’t meant for Instagram. It was meant for you.”

For friends and graduates Chavis Tabor and Raj Patel, both of whom have their own dreams of one day becoming medical doctors, having a physician as their commencement speaker was particularly fitting.

Patel, a biology major from Goose Creek, South Carolina, said he chose CofC because of its close relationship with MUSC.

“The size and close working relationships between faculty and students provides incredible opportunities for undergraduates to engage in research,” said Patel. “I know with other schools, especially much bigger schools, you can’t really get a one-on-one relationship with a professor.” 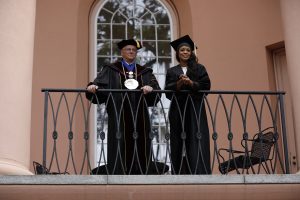 Interim President Stephen C. Osborne ’73, who is retiring from the College after 13 years, watches graduates from the Randolph Hall balcony with commencement speaker and CofC alumna Ebony Jade Hilton-Buchholz ’04. (Photos by Heather Moran)

“When I was born I had a heart defect, and I got my surgery at MUSC. The surgeons at MUSC did a fine job on me. They saved my life,” said Patel. “That’s always inspired me. I want to go into heart surgery and give back to a profession that’s given me so much.”

“I’ve had some twists and turns,” he said of his time at CofC. “It’s the end of a long, hard-fought journey. I’ve made a lot of good friends, and I’m just here to celebrate with them. This is our day.”

Exercise science major Marquesia Stephens said she, too, persevered along a winding road to graduation.

“It’s a little surreal. I don’t think it’s going to hit me until I grab that diploma,” said the Hartsville, South Carolina, native. “It’s been a long time coming.”