Media Executive Tells Graduates to Expect Changes in Their Lives

Jody Gottlieb ’89 says she was shocked when she received a phone call earlier this year from College of Charleston Interim President Stephen C. Osborne ’73.

“I panicked. I thought he was calling to ask for my diploma back,” said Gottlieb.

She soon found out the real reason for the call. 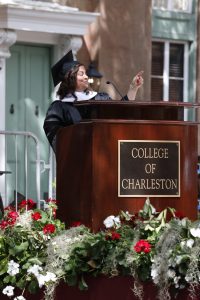 Osborne was inviting her to give the commencement address at one of the three College of Charleston spring graduation ceremonies. She cheerfully accepted.

During her speech to the School of the Arts and the School of Business graduates on Saturday, May 11, 2019, Gottlieb said she wanted to tell them the one thing that she wished she would have heard at her graduation.

“You can’t imagine the journey that lies before you and it may not be the one you are dreaming of,” she said. “My advice to you is stop looking for the road map; instead, chart your own course and be open to the diversions that present themselves along the way.”

Gottlieb told the crowd that after graduating from CofC with a degree in art, she decided to go to the Fashion Institute of Technology in New York. While she was a student at the institute, one of her professors asked the class to create an audio project about something that inspired them. She said working on that project allowed her to realize an unexpected career path as a producer and storyteller.

“After discovering my passion and competence in making television and film in NYC, I landed gigs at Turner Broadcasting and CNN, won multiple Emmy and Peabody awards and even an Academy Award nomination,” Gottlieb said. “Not bad for a girl from Flint, Michigan.”

Gottlieb is now the chief creative officer and executive producer for the Seattle-based Rainstream Media where she oversees the creation, development and production of nonfiction scripted and unscripted content. She is also the co-creator of Somebody Somewhere, a 2018 Spotify Editor’s Choice podcast. Prior to working at Rainstream Media, Gottlieb was the head of production and development for Microsoft co-founder Paul G. Allen’s Vulcan Productions. 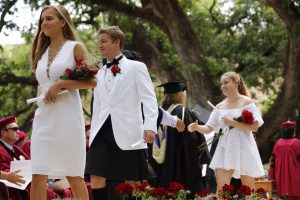 The College awarded Gottlieb with an honorary degree of Doctor of Humane Letters. Honorary degrees were also awarded to:

Prior to the ceremony, students gathered in Cougar Mall to get ready for their procession into Cistern Yard. They bunched in small groups to reminisce and talk about post-graduation plans.

Madison Mason, an international business major from Lexington, South Carolina, was excited about the ceremony. She said this graduation has a special meaning to her because it is also Mother’s Day weekend.

“This is my gift to my mother,” she said with a laugh. “It’s pretty important.”

“No more tuition,” Juliette Dickson chimed in. “It is like a pay raise for my parents.”

Dickson is also an international business student from Southlake, Texas. She says she will be heading to Charlotte, North Carolina, soon to begin work as an account manager for a logistics company.

Standing next to Dickson, hospitality and tourism major Rebecca Welch of Greenville, South Carolina, added she was also excited about her next step. “I am going to work for Disney in August,” she said.

Over 500 students from the School of Business and the School of the Arts received their degrees during the Saturday morning ceremony.