After having not competed in upwards of 15 years, the College of Charleston competitive cheerleading team took home fourth place at the National Cheerleaders Association (NCA) Collegiate National Championship in Daytona, Florida, in April 2019.

“The experience felt indescribable,” junior member Mary Beth Vassy says. “It was a rush of joy knowing that all our hard work had paid off, and that we had represented CofC to the best of our ability.” 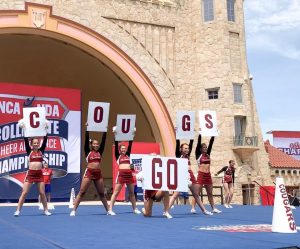 The team set their minds on the National Championship from the start of their season. With the NCA being the largest collegiate cheerleading competition in the nation, Head Coach and alumna Samantha Pairet ’18 knew she needed a team that was up for the challenge, and having been a member of the squad for three years prior, her expertise was keen.

“Watching this group of individuals come together over the course of a year was an incredible thing. Sometimes cheerleading can feel like a never-ending group project,” jokes Pairet, “but I couldn’t imagine a better group of athletes to represent CofC.”

On April 4, 2019, a team of 10 women from the College competed in the Game Day Division 1 event. Their routine consisted of a band chant, crowd leading section and fight song. Once on the mat, the women executed several stunts, including back tucks. Their music was put together and recorded by Chucktown Sound, CofC’s official pep band.

“This division was a way to get our feet wet after having been away from the competition for so many years,” says Pariet.

The countless hours of preparation all came down to a two-and-a-half-minute performance against the top cheerleading programs in the country.

After the national competition, the team’s season concluded with a celebratory banquet and awards ceremony.

“This year was a big step for CofC cheerleading,” says junior Mackenzie Lowrie. “Being able to say that I helped make this step for the program is so honoring and humbling.”

The NCA competition hasn’t seen the last of CofC, as the cheerleading team is already making plans to return in 2020. The team is hoping to compete next in the Division 1 Intermediate competition, and place even higher. Go Cougs!

Scout Petersen is a senior from Omaha, Nebraska, studying English, creative writing and business at the College of Charleston.