If there’s one player on the College of Charleston baseball team that has a unique story, it’s Ari Sechopoulos (pronounced SUH-COP-UH-liss).

Born in Uruguay to a Greek father and a Canadian mother, Sechopoulos’ father, Panos, did everything he could to keep his Greek family tradition alive with his children.

“From going to church to attending Greek school at a young age, my dad tried to keep Greek traditions in the family,” says Sechopoulos, an accounting major and finance minor. “However, it was never forced on me or my other siblings. We grew up with a very normal childhood.” 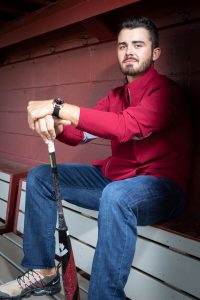 When the junior first baseman was a toddler, his father wanted a new beginning for his family. The elder Sechopoulos settled his family in Windsor, Ontario, Canada, starting a new life, after leaving his construction business behind in Uruguay.

“It was a pretty smooth move,” says Sechopoulos, noting that it was probably the biggest decision of his father’s life. “When we moved to Canada I only spoke Spanish, but it took me only a couple of days to pick up English.”

It also didn’t take long for Sechopoulos to gain interest in sports. He played baseball for the first time when he was just four years old during his first year living in Canada.

“It was just a sport to try,” he says. “My parents never played and I just wanted to give it a shot.”

From then on, his trajectory on the baseball field has only gone up.

The College of Charleston baseball coaching staff first discovered Sechopoulos at a tournament in Florida. For him, the decision to commit to play baseball at the College was an easy one.

“It took me all but one night to make my decision,” he says. “I called the next day and committed.”

Currently he is one of best defensive first basemen in program history and known for his glove. He also boasts a .987 career fielding percentage and has hit 15 career home runs to date for the Cougars.

“Ari has great physical tools,” CofC Head Coach Chad Holbrook says. “He has power, savvy and is a terrific first baseman. He is a baseball junky that just loves the game.”

Sechopoulos’ skills will be on full display during the 2019 Colonial Athletic Association Baseball Championship in Harrisonburg, Virginia. The tournament kicks off on Wednesday, May 22, 2019. No. 2 CofC (36-19, 16-8 CAA) will take on the winner of game two (No. 3 William & Mary vs. No. 6 James Madison) at 7 p.m. on Thursday.

The first nine games of the 2019 CAA Baseball Championship will stream live for free on CAA.TV as well as OTT platforms Roku, AppleTV, Amazon Fire TV and Android TV. The CAA championship game will be shown for free on CollegeSportsLive.com.