College of Charleston Head Softball Coach Linda Kalafatis is in her 30th season as a collegiate head coach and in that time she has seen and contributed to the tremendous growth of the game.

She recalls primitive softball bats, which were flat on one side, or ones with curved handles that helped hitters square the barrel up at impact. Kalafatis has been part of the evolution of coaching softball, the rise of specialized trainers and the development of the sport’s technology. 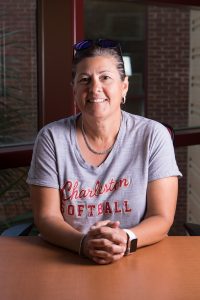 Most importantly, she has enabled her student-athletes to grow as people and challenged them to live up to their fullest potential both on and off the field.

Her journey began in Bethel Park, Pennsylvania, where Kalafatis was born to parents of Greek heritage and unbridled sports passion. Despite growing up in a sports-passionate family, her opportunities to compete were few and far between. She was discouraged from participating in any athletics by her mother, who told her that it wasn’t what traditional Greek women did.

But Kalafatis was a natural athlete and jumped at any opportunity she had to follow her older brother to football or baseball practice and pick-up games. Once there, her brother and the other boys were no match for her skill anytime she picked up a bat or ball.

There were no organized fastpitch leagues in her town. She finally got her first opportunity to play organized fastpitch softball in the ninth grade. Although she knew she was good enough, Kalafatis was hesitant to try out for the team because it required getting a physical, which meant telling her mom she was getting involved in sports.

At the encouragement – and even playful threatening – of her friends, she decided to go through with it. During tryouts, she was asked to play catcher and was ultimately selected for the position despite her desire to be out in the field.

“At first I thought I was selected, because I wasn’t good enough to play the other positions, as if I’d lost the draw,” says Kalafatis.

However, it didn’t take her long to correct herself.

“Once we got going, I quickly understood the responsibility I had at catcher and I realized the impact and visibility I had on the rest of the game,” she says. “I realized that I won in being selected to play catcher.”

Her love and passion for the game and her newfound position blossomed, serving as a launching point for her long career.

To read the full story on Kalafatis’ journey to becoming a collegiate softball coach visit cofcsports.com.