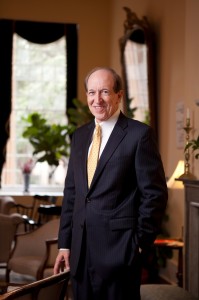 P. George Benson, professor of decision sciences in the College of Charleston’s Department of Supply Chain and Information Management and former College of Charleston president (2007–14), was recently presented with the Albert Nelson Marquis Lifetime Achievement Award by Marquis Who’s Who.

As an essential biographical source for thousands of researchers, journalists, librarians and executive search firms around the world, Marquis Who’s Who selects individuals based on factors such as position, noteworthy accomplishments, visibility and prominence in their field. Benson has been a featured listee in various Who’s Who publications, including in finance and business, in America, in American Education, in the Midwest and in the South and Southwest. In recognition of his outstanding contributions to his profession and the Marquis Who’s Who community, the Marquis Who’s Who is featuring Benson on its Albert Nelson Marquis Lifetime Achievement website.

As president of the College, Benson focused on initiatives to improve CofC’s operations and future development, streamlining the reporting structure of the senior administrative leadership, rebuilding the College’s institutional advancement division and creating several new offices, including the Office of Legal Affairs, the Office of Sustainability and the Office of Institutional Events. He introduced a new performance-based merit review system for evaluating and rewarding faculty and acquired state approval for the College’s long–sought after MBA degree program. He established new student safety and security programs and led a comprehensive strategic planning process. Furthermore, Benson led the development of both a new master plan for the campus and the College’s first-ever diversity strategic plan.

Benson’s career in academia began in 1977. He was the Simon S. Selig Jr. Chair for Economic Growth and dean of the University of Georgia’s Terry College of Business from 1998 to 2007; dean of the Rutgers Business School at Rutgers University from 1993 to 1998; and, at the University of Minnesota’s Carlson School of Management, he was a professor (1977–93), head of the Decision Sciences Area (1983–88) and director of the Operations Management Center (1992–93). During his time at Minnesota, he taught statistics, quality management and decision analysis.

Benson’s research interests include quality management, strategic planning, corporate governance, belief formation, judgmental forecasting and applied statistics. He has written extensively as a result of his research in such publications such as Decision Sciences, Management Science, Journal of Quality Technology, Journal of Production and Inventory Control, Journal of Finance and, most recently, Journal of Performance Excellence. He is also co-author of one of the leading textbooks in business statistics, Statistics for Business and Economics. The book was first published in 1978. Its 13th edition was published by Pearson in 2018.

Benson serves on the boards of directors of three public companies: AGCO Corporation, Crawford & Company and Primerica Inc. He is the lead director of Primerica’s board and chairs the governance committees of all three boards. He also serves on the South Carolina Advisory Board of Synovus Financial Corporation.

Benson has been a national judge for the Malcolm Baldrige National Quality Award, an award presented by the President of the United States to the top performing organizations in the country. He chaired the Board of Overseers for the Baldrige Award in 2005–06 and has chaired the Board of Directors of the Foundation for the Malcolm Baldrige National Quality Award since 2013, being reelected three times. His current term ends in December 2019.

Benson was named a fellow of the Decision Sciences Institute in 2000. He has been a longtime member of the American Statistical Association, the Institute for Operations Research and Management Sciences, the American Society for Quality and the National Association of Corporate Directors (NACD), among others. He is currently a member of NACD’s Nominating and Governance Committee Chairs Advisory Council.