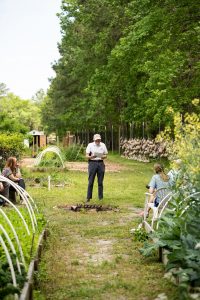 The soil is rich at the College of Charleston at Stono Preserve – almost as rich as the history. And, with the new “Hidden Hands that Worked this Soil” teaching garden, the College’s Master of Science Environmental and Sustainability Studies Program (MES) is digging deep into both.

“We can grow more than crops,” Annette Watson, director of the MES Program and a political science professor, told the students, faculty and community members gathered at the teaching garden’s groundbreaking ceremony last month. “The stories we hope to tell through these plantings can tell not only about our many pasts, but also about a collaborative future.”

The history told by the plant species in the Hidden Hands Garden goes back to the Native American people who worked its land. The garden is in close proximity not just to the grounds of the Yemassee War of 1715–1717 between native people and British settlers, however; it’s also close to the historical pathway of the Stono Rebellion of 1739, in which enslaved Africans marched for freedom. Because this rich history has not been well-recognized in the gardens or agricultural spaces around Charleston, the Hidden Hands Garden aims to bring to light the contributions of those early agriculturalists – and to learn from them.

“We’re calling it the Hidden Hands Garden, meaning the hidden labors and hidden knowledge of all the agriculturists in the area – especially folks that were enslaved on these plantations brought over from Africa – who used their indigenous traditions and a whole host of knowledge about plants and techniques to do sustainable agriculture,” says Watson, noting that it is important that the project is sure “to tell histories that are positive, true celebrations, rather than focus on telling histories that serve to continue to divide us. There is much to learn from the early agriculturalists, including the history of the human-environment system, and for the future of sustainable agriculture.”

The contributions of such early agriculturalists, says Lucy Davis, MES program coordinator and director of the Sustainable Agriculture Program, cannot be overstated.

Such sustainable methods include rice cultivation and companion planting. One example is the Native American technique of the “three sisters,” in which corn, squash and legumes are planted together to reduce water and labor requirements – and to help control pests and weeds. The garden will also include a provisioning bed featuring species such as okra, black-eyed peas and millet, brought over from West Africa during the Middle Passage.

“So, what we’re going to bring to light is kind of how these varieties got here,” says Davis. “For instance, African-American enslaved women would sew seeds into their skirts, knowing that they might be kidnapped and brought over, and they needed something to keep them alive. So, that’s how we got a lot of the different seeds here, and that’s never really spoken about. People don’t know that. So, it’s kind of cool to bring that to light and talk about how important that is. Like, ‘Where did we get okra from? Where did we get watermelon from? What is a sustenance crop? What is a cash crop? And how did that really transcend throughout this time from slavery to now?'”

Indeed, there’s a lot growing in the Hidden Hands Garden – and what we learn there might just change the landscape of the future.