It’s one thing to be accepted into a highly regarded music competition – it’s quite another to prepare for it. That’s why College of Charleston music major Tianyu Liu really stepped up his game when, from hundreds of entrants from all over the world, he was selected as one of 16 finalists for the Michael Hill International Violin Competition.

The competition, which takes place from May 31 – June 8, 2019, in New Zealand, tests the mettle of a violinist. That means playing a solo as well as works accompanied by piano, including a commissioned contemporary piece, in the first two rounds. In round three, six semi-finalists will perform a Mozart quintet with leading New Zealand musicians. For the final round, three finalists will perform as soloists with the Auckland Philharmonia Orchestra. 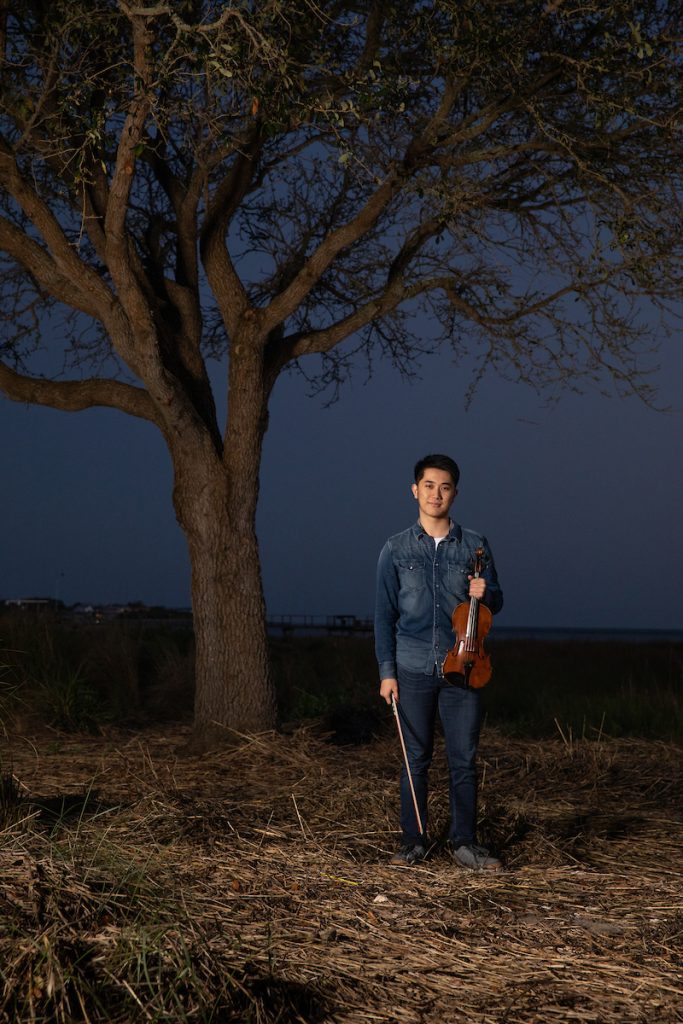 Tianyu Liu with his violin. (Photos by Heather Moran)

“This competition takes into account the whole experience,” explains Lee-Chin Siow, associate professor of music at the College. “They are looking for a complete package – the next generation violinist who is also a well-rounded musician. That is why the repertoire selection is so thoughtful and extensive. The prize is also significant, which includes performances, a recording contract, artist and media management, and on top of all that, one lucky winner will get a chance to perform on an exquisite 1755 Guadagnini violin!”

To prepare for the competition, Liu, a native of Wuhan, China, needed the right resources.

“[School of the Arts] Dean Valerie Morris and music department chair Edward Hart have been so supportive of Tianyu,” says Siow. “They made time to help him fully utilize all the resources at the College.”

Fortunately, the College’s music department has the capacity to support Liu in preparing for the range and scope of the competition. For the contemporary piece, Liu worked with Yiorgos Vassilandonakis, associate professor of music.

“It’s a challenging piece – very different from the other more standard classical repertory,” says Liu. “I am fortunate to have Professor Vassilandonakis, who is an expert on music theory and modern pieces, to help me with the interpretation.”

For the piano accompaniment, high schooler, Caleb Borick has been helping out. Borick, who plans to attend CofC next year, enjoys playing chamber music, making him the perfect partner for Liu. For the string quintet, Liu turned to his classmates, Marshall McArthur, Tianrui Hu, Jin Hui and Mariya Savelyeva, to help him prepare. And Siow will accompany Liu to New Zealand.

“Having your teacher and mentor beside you is of tremendous help,” says Liu, who first started getting violin lessons from Siow when he was 14. “Professor Siow encourages me to strive and test myself in competitions. Her unconditional and constant belief in her students is very encouraging and infectious. Her training, including multiple performances and post-performance analyses, is why I am where I am today.”

As an award-winning violinist, Siow understands the psychological and physical preparation it takes for a competition like the Michael Hill International Violin Competition.

“When I entered into competitions when I was Tianyu’s age, my father would always tell me that you have to have the fearlessness of a bullfighter, the concentration of a monk and the strength of a lion to succeed,” says Siow.

Regardless of where he lands, Liu’s participation in the competition will give him the platform to put his mental strength and skills as a violinist to the test.