Pain. Anger. Sadness. Laughter. Joy. Art – the amazing platform that merges expression and imagination into a single plane that lays bare the human condition – can make you feel it all.

To help students better feel the power of the performing arts, the College of Charleston offers a class every May that pulls back the curtain on Spoleto Festival USA. Open to all majors, the Maymester Spoleto course is offered as a humanities elective and is co-taught by Edward Hart, professor of music theory/composition and chair of the Department of Music, and Todd McNerney, professor of performance in the Department of Theatre and Dance and associate dean of the School of the Arts. This unique class gives a group of up to 40 students exclusive access to actors, musicians and industry professionals associated with the international arts festival, as well as lectures focusing on different works and elements of the arts such as opera, jazz and theater. 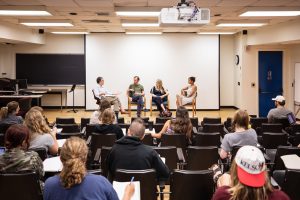 For example, the class heard from members of Shakespeare’s Globe, a London-based theater company specializing in the work of William Shakespeare, on Thursday, May 30, 2019. The week prior – after cheering and applauding with the rest of the audience to select the evening’s performance from three plays (Twelfth Night, The Comedy of Errors and Pericles) – the class had had the opportunity to see the company perform A Comedy of Errors. In the subsequent discussion, moderated by Hart, actors Colin Campbell and Evelyn Miller and associate director Isabel Marr talked about everything from the challenge of learning three plays for their audience-choice performances to how performing for American audiences is different to diversity in television and theater.

“What is the state of the art [of theater] right now?” asked Hart, pondering whether Shakespeare will continue to grace stages for the foreseeable future. “Is it healthy? Is it going to survive?”

“By virtue of the fact that these shows have been put on for so many hundreds of years, you think, if they’ve lasted that long, they clearly are just sort of timeless,” answered Marr.

And Campbell noted that live theater, when done well, can be a unique experience for the audience: “If you get it right, it’s something to be remembered.”

The students in this year’s class certainly found something to be remembered in the seven live performances – ranging from theater and opera to jazz and chamber music – they attended. Caroline Carey, a rising senior majoring in arts management, says it’s been particularly special to hear from the artists and learn firsthand what goes into the various productions they’ve seen. In addition to the actors and director from Shakespeare’s Globe, students have also had classroom visits from soprano Melanie Henley Heyn, who performs the title role of the opera Salome; Larry Blumenfeld, jazz curator for Spoleto; and Nicole Taney, director of artistic planning and operations for Spoleto, to name a few.

“It changes the class completely,” says Carey of such visits. “I think that hearing from the individual performers, especially the ones you see before the performance, it gives you a little glimpse into what you’re going to see and gets you more excited for what you’re going to see. And I think that’s beneficial for the people who have never been to these types of art forms.”

Carey adds that the lectures from Hart and McNerney also complement the different productions they’ve seen.

As for the professors, McNerney and Hart hope that their students leave the class with a better understanding of the breadth and depth of the arts.

“What I hope they get out of this one is the intersections between all the arts,” says McNerney, adding, “There’s a small part of me that hopes for as long as they’re alive, the students will be excited about going to see the performing arts.”

Tagged with: Department of Music • department of theatre and dance • homepage-feed • school of the arts • spoleto • today-featured