When Sarah Stertz Winecoff ’13 got a request last year from Kristen Hua ’07, assistant registrar for registration and course/academic events scheduling, to brighten up the College of Charleston’s Office of the Registrar with a mural, she had to think of a worthy subject to grace the walls of that important institution.

“I was given lots of creative freedom and only prompted to design a mural that had something to do with the office’s role on campus,” she says.

She thought of the experiences that typify being a student at CofC.

“I submitted several watercolor sketches for the office to vote on: a graduation scene, a view of Porters Lodge and a classroom scene. The office deliberated and decided instead of one mural they wanted three,” says Winecoff. “For the first mural, they had a great idea of doing a triptych, or three scenes, depicting the beginning, middle and end of a student’s journey using the classroom scene and graduation scene.” 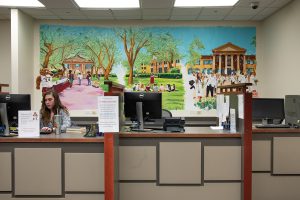 Then she ran with the concept.

This was Winecoff’s first time painting on such a large scale, but she knew she would figure it out, noting “I’ll always take an opportunity to learn and grow.”

Winecoff is a graduate of the Honors College with a major in French and Francophone Studies and a minor in international business – not the usual path for a muralist. However, she grew up surrounded by artists and owns her own stationery business, Slow Poke Press, which sells cards printed with her original ink and watercolor illustrations.

“I was very nervous to accept, but after I said yes, I was buzzing with excitement. I had never painted a mural this large – the wall stretches 17 feet!” she recalls. “I called my dad [Jim Stertz], a fellow artist, to get advice on the best reference material for inspiration and he told me, ‘They hired you. Be yourself.'”

One of Winecoff’s greatest influences as an artist was her father. Unfortunately, tragedy struck while she was working on the murals and he passed away. The project took on a whole new meaning for her. 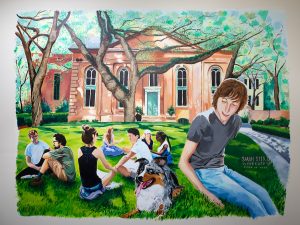 “I lost my dad during the middle of the first mural. After some time off, I came back and found that doing something we both shared, like painting, helped me get through those hard, early days,” she says. “Each day, I grew in confidence that not only could I finish such a large scale project, but also that people would enjoy having it there. I feel like each mural got a little better than the one before, and I was painting bolder and faster with each one. I give God the glory for the opportunity to work on such an amazing and challenging project and for finishing it.”

In addition to the triptych scene of a student’s journey, Winecoff also painted a mural of Porters Lodge and another of Towell Library. The experience of completing the project has been powerful, she says.

“After painting the murals, I’m learning to trust myself more and to keep saying yes to things that are out of my comfort zone,” she says. “You spend a lot of your life at work, so work at something that you’re passionate about. In the months after finishing the murals, I’ve opened a gift shop [The Wharf Market] showcasing my artwork and other local artisans. My new post mural motto is ‘Say yes. Go for it. Be yourself.'”

If you’d like to see Winecoff’s work, stop by the Office of the Registrar in the Lightsey Center at 160 Calhoun St. If you’re interested in her new shop The Wharf Market, it’s located at 5 Cordes St., and sells locally made gifts, Winecoff’s artwork and handmade greeting cards, and other artisan crafts and eco-friendly homeware.