“I studied how planets that are roughly the size of Earth migrate within a gaseous disk,” says Roberson. “We did this through simulations using a code that is written to help simulate these developments.”

The “we” includes his faculty adviser, Ana Uribe, but he might also be referring to Horatio Hughes ’05 (that’s 1905) – who taught chemistry and physics at the College from 1923 to 1950 – given that his eponymous scholarship covered the cost of Roberson’s research and other expenses.

“The scholarship really helped put my mind at ease,” says Roberson. “You want to make sure you have done everything you needed to do to ensure that all of the money you need is there for the year, and, with the scholarship, I knew I was covered in some areas.” 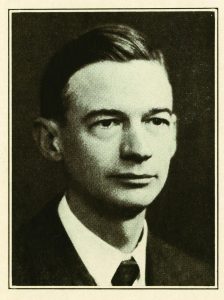 Hughes’ daughter Patricia Hughes Farrow ’48 and her husband, Thomas Ferguson Farrow ’49 (the two met while at CofC) established the Horatio Hughes Memorial Scholarship in 2011 through a charitable trust that began funding scholarships after both had passed away. The trust funds about $30,000 in scholarships for 10-15 science students a year, along with a handful of research stipends, like Roberson’s.

“My mom thought it was a worthwhile thing to do out of respect for her father,” says Patricia’s son, John Farrow, who has fond memories of his grandfather, known as “Papa.” “He was a neat guy. I remember him as a very kind, gentle and scholarly fellow.”

Born in 1885, Hughes earned his master’s the year after he graduated from the College. Perhaps one reason why the Farrows created the scholarship was to pay it forward, since Hughes received a $50 Boyce Endowment Scholarship. The Boyce Endowment – the first ever at the College – was established in 1856 by Kerr Boyce. As a true testament to sustainability, the Boyce Endowment is still being awarded today. In a thank-you letter he wrote as a student, Hughes called the scholarship “an incentive to put forth my best effort to prove worthy.”

It’s a sentiment that resonates with another Hughes scholar, Marni Sapolsky ’18.

“After being notified that I received the scholarship, I did some research,” says the chemistry major, “and was even more honored to receive this scholarship because it was named in memory of such a distinguished professor at the College.”

Hughes began teaching at the College in 1923 after professorships at Georgia Tech, the University of Georgia, Presbyterian College and Florida State College. He received his Ph.D. in chemistry from Johns Hopkins University in 1913, not long after meeting and marrying his wife, Josephine, an antiques dealer. They had three children, Laura, Harry and Patricia, and lived on a farm by a little creek outside of Charleston in Pierpont, now part of West Ashley.

“My grandfather loved the country,” says Randall Swan, one of Laura’s children who spent a lot of time at the farm learning about nature from Hughes. “He built an old-fashioned log cabin on the property with a huge wooden fireplace and a loft that I would sleep in. He was a naturalist who could identify almost anything in nature. He had a love for the land, as well as being an intellectual.”

He was also a bit of a fashion plate, at least twice in his life.

“My mother said that when he started teaching at the College, he went out and bought a bunch of pinstripe suits and wide ties, which were very much the fashion at the time,” recalls John Farrow. “Of course, they went out of fashion, so he was totally out of style for a very long time, but they came back after The Godfather came out, and suddenly he was the most stylish man in town again.”

Hughes remained active and spry up until his passing in 1980 at age 94. Farrow recalls his letters to the local Charleston paper, The News and Courier, which were invariably in the form of corrections.

“He had a prodigiously good memory,” recalls Farrow. “He was a very interesting man who was sharp his whole life. He was just one of those people.”

He passed on those good genes, too: Patricia Farrow returned to CofC to study Classical Greek so she could read the Classics in their original language.

“My mom was very attached to the College, and obviously my grandfather was, too,” says Farrow. “We usually get a few letters each year from the students who receive the scholarships, and it’s always nice to hear from them. You feel like you’re passing something on – that Papa is still contributing in some way. He definitely would have appreciated a scholarship that bears his name.”

Featured image: Wendell Roberson ’18 received the Horatio Hughes Memorial Scholarship to assist with his research on how planets migrate within a gaseous disk. (Photo by Reese Moore)

Tagged with: department of chemistry and biochemistry • department of physics and astronomy • homepage-feed • philanthropy • scholarships • school of sciences and mathematics • today-featured